B/E Aerospace reported an operating profit of USD71.9 million in 4Q2009 (down 20.8% year-on-year), as revenue dropped 9% in the quarter to USD474.9 million. These results were slightly better than analysts’ expectations.

Full-year 2009 revenue declined 21.1%, while operating profit for the full year fell 24.8% to USD296.1 million. Through 2009, airlines, aircraft OEMs, subcontractors, and MROs all implemented stringent cash conservation measures “which resulted in the deferral of fleet refurbishment programs and a massive de-stocking of consumables and spare parts.” Demand for commercial aircraft spares and consumable products declined for approximately 30%.

The final quarter of the year saw orders improve, to approximately USD480 million. 4Q2009 is the first quarterly period in more than a year that B/E Aerospace has managed to finish with a book-to-bill ratio of better than one.

As traffic improves through 2010, the company expects higher consumables demand and a “marked pick up” in interest in retrofits and new acquisitions. It expects orders to outweigh delivered products and business in 2010, which it believes will “drive a significant increase in revenues, earnings and cash flows beginning in 2011”.

2010 will still be a challenging for the year, with a forecast 4.5% decline in revenue, to USD1,850 million, thanks to slower ordering in the first three quarters of 2009. Results are still expected to be positive, with favourable quarterly earnings comparisons to 2009 expected from 2Q2010. For the full fiscal 2010, the company expects earnings to match 2009 levels, with an expansion in orders and its backlog.

Mr Khoury stated that although global economic signals remain mixed, there are some signs of stabilisation regarding several major metrics, such as international traffic, which improved 4.5% year-on-year in Dec-2009. The company expects traffic to begin to show sustainable growth and yield improvement, leading airlines to begin to return their parked aircraft back into service. There is also a backlog of required heavy maintenance that will likely create additional demand for consumables and spares. 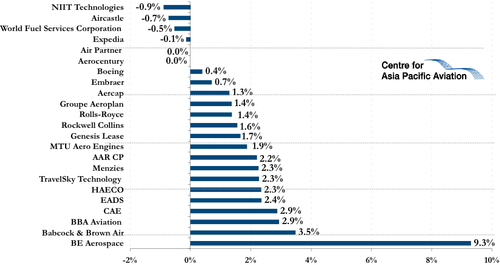