Bangalore International Airport Limited (BIAL) this month unveiled designs and details of the Terminal 1 (T1) expansion which will deliver enhanced capacity to cater to the rapidly growing passenger traffic in Bangalore.

The airport expansion, which is scheduled to commence in Sep-2010 in a three-phase process, has been designed to enhance operational performance in order to handle the expected increase in passenger traffic between now and 2015 during which period traffic is projected to grow from the current 10.6 million passengers annually to approximately 17 million passengers.

The expansion is scheduled to be completed in 18 months from the commencement of construction at an estimated cost of USD214 million. The expansion involves a 70% increase in the size of the existing terminal building to more than 130,000 sqm

Phase I will include additional security checkpoints for domestic and international departures, more seating and an exclusive lounge area within the current terminal. Phase II (expected to be complete in 18 months) will expand T1 capacity by 70%, while Phase III involves the construction of Terminal 2, which will commence in the next four to eight years, with the project to expand the airport's capacity to 36 million passengers.

Announcing the expansion, GVK commented that the project is part of efforts to make the airport the “gateway to South India”, with BIAL MD, Sanjay Reddy, adding: “The expansion of the existing terminal marks a significant milestone for Bengaluru International Airport and is a step towards giving the city of Bangalore an airport that caters to its global aspirations.”

GVK has a 29% stake in the airport and is the second largest investor there. Mr Reddy commented: "We are interested in picking up a stake. But they have to offer it”. Mr Reddy added that the first opportunity to acquire 14% of Siemens' 40% stake would occur in 2011 and GVK will have the first right of refusal if Siemens is seeking to sell. Siemens can then, in Jun-2015, fully exit the project, when the lock-in for the remaining 26% ends. This is based on the shareholders' agreement signed among the original five promoters of the airport in Jan-2002. 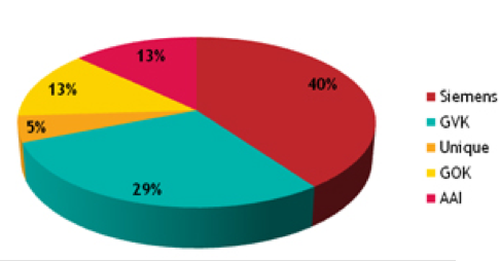 Domestic traffic posted year-on-year declines in the 14 months between May-2008 and Jun-2009, although international traffic remained in positive territory throughout the period. 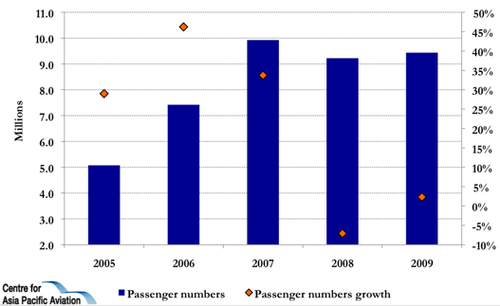 Meanwhile, the high-speed rail project, which will link the airport to the central area of Bangalore (Mahatma Gandhi Road), by an approximately 35 km rail line, was tentatively cleared by an Empowered Committee of the Union Government in Aug-2010. Karnataka Government has now submitted the Detailed Project Report, the Request for Proposal, draft of the Concession Agreement and other necessary documents for formal clearance.

The estimated cost of the project is USD1.4 billion, with the government expected to provide approximately 20% of the funds. India's Civil Aviation Ministry, however, rejected Karnataka Government’s request for equity participation by the Central Government in the proposed high-speed rail. The request was rejected due to Airport Authority of India's other financial commitments.

Meanwhile, National Highways Authority of India this month commenced upgrade work on the four-lane highway to Bangalore International Airport, with the road to be upgraded to a six-lane expressway by 2013. The road will be upgraded at a cost of USD149 million on a build-operate-transfer (BOT) basis. The project has been given to Navayuga Engineering Co Ltd, with initial upgrades to be completed in two years.

BIAL will not review user development fee until 2011

BIAL in May-2010 announced the Indian Airports Economic Regulatory Authority would not revise the user development fee levied at Bangalore International Airport until 2011, with the UDF fixed for three years.  The airport collects INR260 (USD5.55) per domestic departing passenger and INR1,000 (USD22.85) for international services.

Separately, BIAL commenced work on its real estate development in May-2010, as part of efforts to raise non-aeronautical revenues to the 60:40 ratio (in favour of non-aeronautical income). The plan would be implemented in 2011 and cover 515 acres of real estate near the airport for MRO facilities, a cargo and logistics centre, hotel and conference centre.

A bit of background

Bangalore International Airport Limited (BIAL), the owner and operator of the new Bengaluru International Airport, is a public limited company, registered under the Indian Companies Act. The company is a public-private venture, which will operate the airport for the next 30 years, with an option to continue for another 30 years.

Bangalore International Airport is located 40 km North of Bangalore’s CBD, and serves the "IT capital" of India. The airport is spread over an area of approximately 4000 acres and besides airport services will offer a hotel, shopping mall, food courts and other convenience amenities in the upcoming project phases.