Scandinavia’s largest LCC, Norwegian Air Shuttle, is continuing to capitalise on the weakness of its rivals, the troubled SAS and loss-making Finnair, by maintaining its plans to increase capacity (ASKs) by 15% in 2009 and discounting fares aggressively to gain market share. 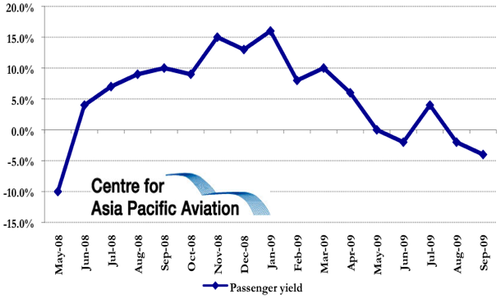 Sep-2009’s year-on-year yield fall marks only the third monthly reduction at the carrier since Jun-2008, and is related to the removal of fuel surcharges that covered last year’s record high fuel prices. Yields grew 10% last September, thanks to the application of the fuel surcharge. 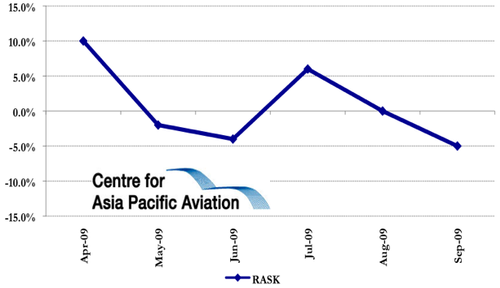 Norwegian, which reported the most profitable second quarter in its history this year, with a net profit of EUR20.0 million, is well positioned in the current global economic recession.

Two years ago, Norwegian Air Shuttle was a quarter the size of SAS Group. The carrier has since grown to become slightly less than half the size of its larger, yet struggling, competitor, and is now the fifth largest LCC in Europe, behind Ryanair, easyJet, Air Berlin and Vueling.

Norwegian growing at the expense of its network competitors

Also in Sep-2009, Norwegian reported a 24% year-on-year increase in passenger numbers to slightly over 1 million, with load factors slipping 1 ppt to 77%.

Norwegian has reported the strongest load factor among its Scandinavian counterparts in every month of 2009, except Jan-2009, as the carrier’s 17% traffic (RPKs) gain slightly exceeded its 18% capacity (ASKs) increase. 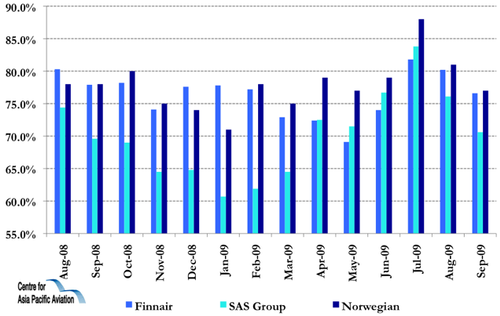 The increase in passenger traffic, capacity and passengers is related to the carrier’s expansion in established markets and to the introduction of new routes from Oct-2008 to Sep-2009, as well as adjustments in production capacity. This strategy has made Norwegian the only Nordic carrier to experienced passenger growth this year. 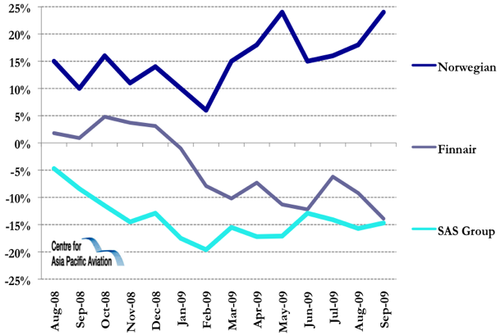 Norwegian has increasingly shifted capacity toward new routes in Norway’s domestic market, and has opened a new base in Copenhagen (the carrier’s average sector length decreased by 5% year-on-year, accordingly), as it attempts to take further market share, especially in the Business segment, away from its struggling Scandinavian network carrier competitors that continue to cut back capacity.

Scandinavian Airlines reported an 8.8% yield contraction in Aug-2009 (in line with the carrier’s guidance and following a yield slump of 3.2% in the previous month, for five consecutive months of falls). 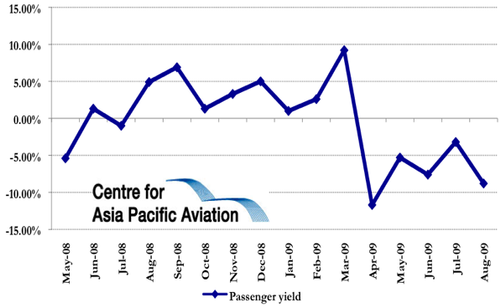 Passenger load factor improvements did not continue in Sep-2009, providing further challenges for the carrier. SAS added that demand "continues to be unpredictable, and the uncertainty regarding the timing of the recovery is considerable”.

Accordingly, the SAS Group is currently implementing a new strategic approach, entitled ‘Core SAS’, which includes cost initiatives of approximately SEK4.5 billion (EUR439 million) and a 20% capacity (ASK) reduction. An additional SEK2.0 billion (EUR195 million) in cost savings was initiated in Aug-2009. As part of this, the carrier has initiated negotiations with unions to reduce costs, with the carrier stating that negotiations with unions are ongoing.

Improvement in SAS load factor fails to continue in Sep-2009

Total SAS Group passenger traffic was down 14.7% in Sep-2009 (to 2.2 million - or slightly more than double Norwegian’s passenger levels), with only Widerøe within the group (ie SAS Scandinavian Airlines, Widerøe or Blue1) reportedly a slightly year-on-year increase in passenger numbers.

During the month, the carrier reduced capacity across its network.

The carrier stated that while it “seems that the bottom has been reached” in terms of cargo throughput, “the same can't be said as far as passenger traffic is concerned".

Both SAS and Finnair are preparing for a tough Winter, with both carriers announcing cash-boosting measures in recent weeks.

On 01-Oct-2009, SAS and Lufthansa announced the sale of SAS’ 20% stake in British Midland for a consideration of approximately GBP19 million (Lufthansa will also pay SAS another GBP19 million for the cancellation of its rights resulting from the shareholder agreement dated 1999).

Lufthansa added that should it decide to sell bmi completely or parts of the company, "SAS will under certain conditions receive an additional payment, within the next two years".

The carrier, last month, also reached an agreement with the Finnish Flight Attendants' Association SLSY on a fixed-term stabilisation agreement, including a collective employment agreement and other cost-cutting elements for the period 01-Oct-2009 to 31-Dec-2010.

Norwegian, meanwhile continues to pick-off growth opportunities provided by its shrinking rivals. The balance of power in Scandinavia is rapidly shifting.