BAA sold London Gatwick International Airport in 2009, which CEO, Colin Matthews, stated the company "does not regret". It reported GBP277.3 million in losses related to the sale of Gatwick. Overall, BAA reported a GBP821.9 million loss after tax in 2009, deepening from a loss of GBP324.2 million in the previous corresponding period.

Mr Matthews added BAA is under no pressure to sell another airport, despite an upcoming debt repayment of GBP1.6 billion in Apr-2010, stating there are different mechanisms for financing the debt.

In Germany, meanwhile, Fraport’s shares gained 0.8% yesterday, as the Lufthansa pilots strike was suspended. The carrier however warned the consequences of the strike will lead to continued flight irregularities in the following days (the carrier has released special timetables for the 22-25-Feb-2010 period, although these remain subject to short-term adjustments). The carrier stated it expects to return to its regular schedule as of 26-Feb-2010. Fraport earlier forecast the pilots strike would cost Frankfurt Airport between EUR1-1.5 million per day of strike action.

Interested in strategic news updates from the world’s airports? Sign up for Airport Business Daily, which also provides access to CAPA Analysis Exclusives, including a report on Singapore today: CAI helps lead Singapore Changi out of the economic doldrums 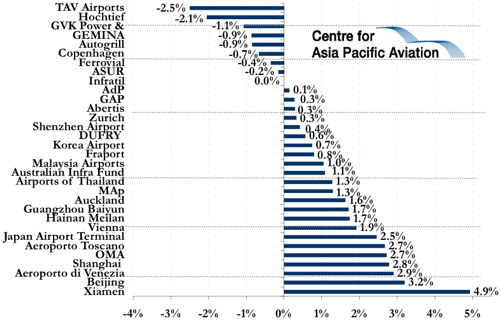