After a sluggish start to trading, British Airways’ shares jumped 2% around 3.35pm yesterday as the carrier gained a London High Court injunction against its cabin crew staging a 12-day strike from 22-Dec-2009. The shares closed 2.4% lower.

The ruling means Unite must give at least one week's notice in the future, should staff vote in favour of another strike, ruling out the planned Christmas strike. It is an embarassing setback for Unite, which expressed disappointment in the decision. The union added it plans to hold another ballot after the Christmas period.

European airline shares were weaker across the board on Thursday, reflecting reductions in all 18 Western European share markets, with the exception of Ireland, as banking shares reversed recent gains (after the US Federal Reserve reiterated that its special liquidity measures would expire in early 2010). 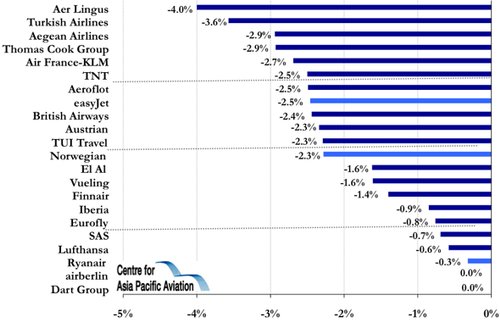 Shares in Lufthansa and Austrian Airlines were down 0.6% and 2.3% yesterday, after a resolution was approved to squeeze out Austrian's remaining minority shareholders. Following the squeeze out, Lufthansa-controlled entity Oesterreichische Luftverkehrs-Holding GmbH will hold 100% of Austrian Airlines shares. The shareholders will be paid just EUR0.50 per share, a fraction of the EUR4.49/share previously offered.

Shares in Air France-KLM declined 2.7% yesterday after RBS reduced its 2010 forecasts for the airline. RBS now expects Air France-KLM to report a EUR1 billion operating loss in 2010, up from a previous expectation of EUR879 million. According to RBS, "Air France-KLM's profitability will lag its peers as we trade through the recovery".

Since the start of 2009, Air France shares have gained 15.8%, slightly outperforming a 13.8% increase at the DJ STOXX European travel and leisure index .SXTP.