Boeing and Airbus parent, EADS, both lost 2.6% in trading yesterday, as global markets had an attack of the bears. Despite record aircraft orders in 2007 and 2008, cancellations and dramatically slower order rates have hit market sentiment for airframe manufacturers this year.

Military contracts have also put share prices under a cloud, with EADS potentially exposed to EUR1.4 billion in penalties for late deliveries of its A400M tanker aircraft, while Boeing is feeling pressure from changes to defence acquisitions under the Obama Administration’s new budget proposals.

Elsewhere, Expedia shares declined 9.5% yesterday, on reports that US online travel agencies intend to extend or make permanent cuts to airline and hotel booking fees, originally implemented on a promotional basis to generate demand over the peak Summer travel period.

Shares in aircraft lessors Aercap, Babcock & Brown Air and Aircastle all fell back yesterday, continuing their week-long downward trend. The share prices of all three lessors have more than doubled since early Mar-2009, but market sentiment now seems to have turned since reports at the end of Apr-2009 that bids for AIG’s leasing unit, ILFC (the world’s largest aircraft lessor), came in at under USD5 billion, well below last year’s book value of USD7.5 billion.

HAECO’s dramatic upswing ended yesterday, after Cathay Pacific stated it had no intention to sell its 27.5% stake in the company. The shares were up 0.3%, having risen more than 30% this week. 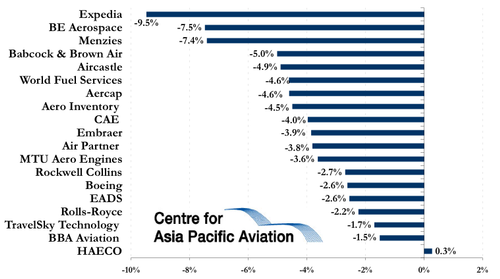