Aviation industry ‘out of the woods’, but remains ‘very fragile’; traffic back to pre-crisis levels

IATA Director General Giovanni Bisignani commented that the aviation industry is “out of the woods” with two consecutive years of profit expected in 2010 and 2011. But he added the usual rider that the industry remains “very fragile” and has a “very weak balance sheet”. Mr Bisignani added that the industry’s current profit margin of around 1% and cost of capacity of 7-8% of borrowing means the industry is “not very sexy for investors” and cautioned: “If we have an emergency, a volcano or something like this, with the financial situation of the banks completely different from five years ago, we’ll be in trouble.”

Mr Bisignani, who will step down as IATA Director General in 2011, also cautioned that an economic reversal, external shock or rush to restore capacity pose the greatest threats to a rebound. He added that profits and yields would be impacted if airlines add too much capacity too quickly.

Passenger demand is now 5% above the pre-crisis levels of early 2008 with freight 1% above. Mr Bisignani commenting: “Where we go from here is dependent on developments in the global economy." He continued: "The US is spending more to boost its economy. Asia outside of Japan is barrelling forward with high-speed growth. And Europe is tightening its belt as its currency crisis continues. The picture going forward is anything but clear, but for the time being, the recovery seems to be strengthening." 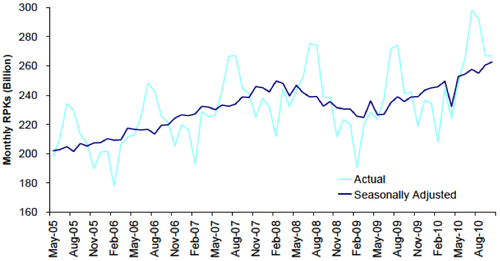 In Oct-2010, international traffic increased 10.1% for the second consecutive month of double-digit expansion. Growth is now returning to a “more normal” pattern as the end of 2010 approaches, although the latest traffic figures suggest that growth remains above trend of around 6% p/a. IATA added that this growth rate is “similar to the trend rate of growth since the low point of mid-2009”. 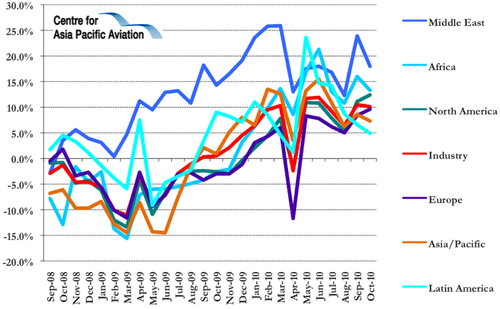 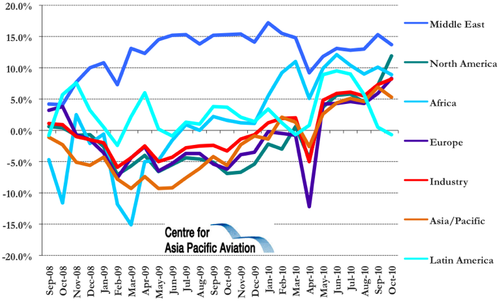 Load factors, meanwhile, remain strong, at 79.6% or 79.2% on a seasonally adjusted basis. This is slightly ahead of the previous peak value reached in Feb-2010 of 79.0%. IATA noted that there is now a “dramatic improvement in profitability associated with the load factors”. Load factor strength is expected to continue over the northern winter and remain strongest in North America. 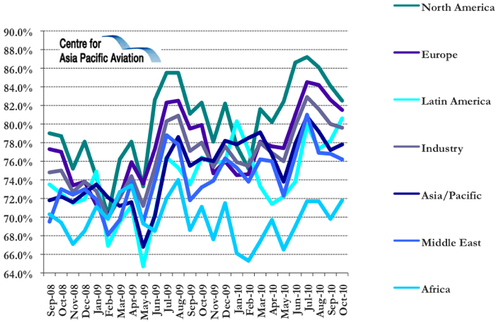 There continues to be, as expected, regional differences. International passenger traffic (+18%) grew fastest in the Middle East in Oct-2010, reflecting in part the timing of Ramadan in August and September this year. Traffic in North America expanded 12.4%, marking the strongest growth of 2010. Europe witnessed traffic growth of 9.6% and Asia-Pacific at 7.3%.

Demand has increased 8.5% over the first ten months, exceeding a 4% increase in capacity, pushing up load factors to an average 78.8%.  However, this gap will narrow in 2011, with IATA estimating traffic growth of 6% and capacity growth of 5%, resulting in yield gains of 0-1%.

This prompted Mr Bisignani to comment: “We have to handle capacity better and we have to be able to run this like a normal business, being able to consolidate. Now consolidation is just regional consolidation. We would like to have access to capital. Mergers between carriers in different continents would help eliminate surplus seating and make it easier to access funds."

IATA also noted that, in absolute terms, traffic in Oct-2010 rose 0.8% month-on-month which is a still strong annualised growth rate of 10%. IATA commented: “So far, the pace of the post-recession rebound in air travel has yet to slow”.

Air freight stabilising but strong growth in Oct-2010; freight up 1% from pre-recession levels

Cargo traffic rose 14.4% year-on-year in Oct-2010, representing the strongest growth since the Apr-2010 peak. FTKs in absolute terms reached an all-time record 14.4 billion in the month. On a seasonally adjusted basis, Oct-2010 freight levels were some 5% below the May-2010 peak. Freight traffic, which accounts for 35% of the value of goods traded internationally, is now 1% above pre-crisis levels of early 2008. 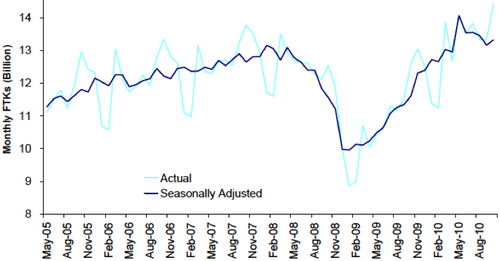 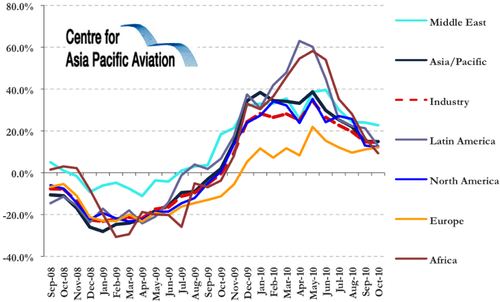 Looking at the unusual freight trends for 2010, IATA commented: “After a dip between March and April, FTKs increased again in May and then were effectively flat until July before trending down over the period to September and then growing again in October. In previous years, traffic has picked up in August and peaked in October; this time around the pickup has been between September and October and we wait to see whether this reflects a slippage and there is a further increase in November or that the normal seasonality returns with November, in terms of the level of actual FTKs, falling back from what would be the traditional October peak. If we extrapolate trends based on the reported peak and trough volumes for FTKs before the downturn, it shows, based on a 2003 starting point, that the 2010 peak and trough lie within the floor and ceiling of the corridor suggesting that previous growth trends have been re-established “.

Outlook: Airlines ending 2010 better than they started; yields, traffic and load factors all growing in 4Q2010

Mr Bisignani commented that the aviation industry is “ending 2010 in much better shape than we were just 12 months ago”, adding that airlines have “turned losses into profits – albeit tiny”.

Looking ahead, the fourth quarter has started at a more robust pace than expected, according to IATA. Traffic and passenger load factors were up significantly and recent economic data has been “supportive” for the coming months. This is expected to generate further gains in traffic volumes and supply/demand conditions for passenger yields also appear to have improved "significantly".

The fact that airlines are managing capacity in the upturn is also aiding this situation. Mr Bisignani added that “cost control continues to be a main theme for airlines everywhere”.