Austrian Airlines soared almost 40% on news Lufthansa's board has decided to pay not much for the airline. Any price, it seems, is good news for Austrian's investors. Lufthansa investors meanwhile seem undeterred the carrier is mopping up another failing European carrier, with its shares barely unchanged.

Lufthansa will pay up to EUR377 million in a performance-based deal for Austrian, subject to government and EU approvals. The German carrier is to pay an initial EUR366,000 for the Austrian government's 42% stake, and may pay a further EUR162 million, subject to Austrian's future performance and the Lufthansa share price. The outstanding publicly traded shares would be acquired by Lufthansa for EUR215 million at EUR4.44 per share.

Lufthansa stated, "structural changes increase the likelihood of Lufthansa and Austrian Airlines sharing a brighter future". Austrian's shareholders seem to think so too.

Meanwhile, Iberia's shares slipped 5.5% as the Spanish carrier sought urgent meetings with British Airways to clarify the status of merger negotiations, now Qantas has made it three in the bed. From yesterday's share market action, it appears investors think Iberia might be the one to roll over. 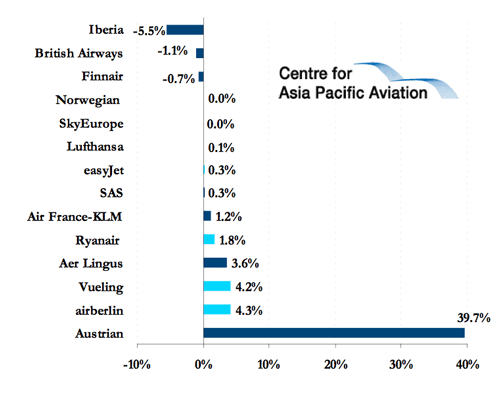