Austrian Airlines to be delisted soon; Vueling and Iberia fall with wider market

European stock markets took a hammering on Thursday (04-Feb-2010), falling the most in ten weeks, and taking airline stocks down with them. Shares were affected by a decline in the banking sector, on concerns of peripheral Euro countries’ debts. Also during trading, the Euro Central Bank kept interest rates at 1.0%, as expected, while the Bank of England also kept rates on hold at 0.5%.

Austrian Airlines soon to be delisted

Austrian Airlines will join Japan Airlines this month in exiting the stock market. Austrian Airlines (+3.9%) announced shares of its minority stockholders have been transferred to ÖLH Österreichische Luftverkehrs-Holding GmbH on 04-Feb-2010, completing the squeeze out of its shares. A delisting of Austrian’s shares is expected soon. Lufthansa (-3.5%) agreed to pay Austrian’s minority shareholders EUR0.50 per share, excluding costs and provisions, after taking over the carrier in Sep-2009. Approximately 3.9 million of Austrian’s 85.1 million shares remained in freefloat after the conclusion of the takeover.

El Al (+1.0%) meanwhile gained on news Israel’s Transport Ministry approved a decision to permit the carrier to operate domestic flights between Tel Aviv and Eilat, following positive recommendations by the Israel Civil Aviation Authority. The carrier will be allowed to operate three times daily service, operating no more than 860 seats per day. It must offer at least a minimum of five flights per week, with no less than 200 seats per day. El Al is also required to keep its international frequent flyer programme separate from domestic operations.

Arkia Airlines and Israir Airlines have 30 days to appeal to the High Court of Justice to void the decision. The Transport Ministry will review the effect of El Al’s domestic services in six months.

Vueling (-10.3%) and Iberia (-4.2%) meanwhile saw the greatest losses yesterday, as the Spanish Index slumped by over 5% to its lowest level since Jul-2009, on concerns over the country’s mounting debt.

Investors are also concerned over Greece and Portugal governments’ ability to fund their budget shortfalls, with their stock markets falling 5.0% and 3.9%, respectively, as a result. Yield spread between the countries’ bonds in comparison to the German benchmark also widened during trading, further affecting their markets. 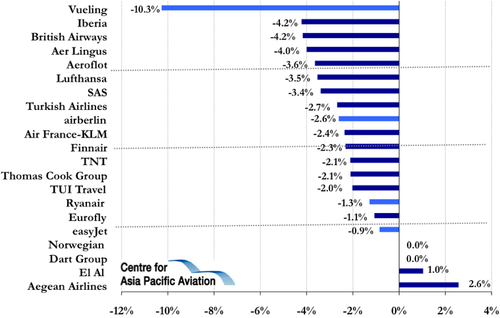