Member of the Austrian Airlines Executive Board, Dr Andreas Bierwirth, announced the carrier aim to return to profitability in 2011 by restructuring its fleet (replacing smaller aircraft with larger ones to reduce unit costs), making further cost cuts and increasing productivity.

The carrier’s co-CEO, Peter Malanik, cautioned that demand will not return to previous levels at the end of the current economic crisis, with pressures from LCCs continuing to be high and many Business passengers downgrading to Economy "on a permanent basis". In response, Austrian will target high-passenger volume markets, abandoning its focus on niche markets in Eastern Europe, but rather aiming for a stronger position in large-volume catchment areas in Eastern and Western Europe.

Dr Bierwirth added he believes the deteriorating passenger trends on the carrier’s long-haul, and Central and Eastern Europe flights have bottomed out. Austrian's shares rose 0.7% yesterday.

Shares in British Airways jumped 2.7% yesterday as the carrier announced plans to cut 1,700 cabin crew jobs. BA does not need to gain approval for the cuts from union, Unite, as the measures are not considered directly related to working practices. The carrier stated the job cuts would include 1,000 voluntary redundancies, allowing approximately 300 staff to change to part time work. The cuts will result in a reduction of the number of cabin crews working on flights from London Heathrow Airport from 15 to 14 from Nov-2009.

A company-wide two year pay freeze on basic pay will also be implemented. Unite reportedly plans to urge members to reject the new contract to be imposed on staff without consultation with the union.

Meanwhile, Aer Lingus union, IMPACT, stated the carrier would advise its staff of cost reduction plans in a statement on 07-Oct-09. Proposals include up to 500 job cuts and a 10% pay cut for remaining employees. The reports sent Aer Lingus’ shares soaring by 9.1% yesterday.

SAS, another carrier targeting employee cost cuts, stated it “expects a return to the negotiating table” soon with Danish cabin crew union, CAU, over a new labour agreement. However, CAU stated it has “no intention” of resuming negotiations, which failed to deliver a result this week. Shares in SAS were down 1.8% yesterday. 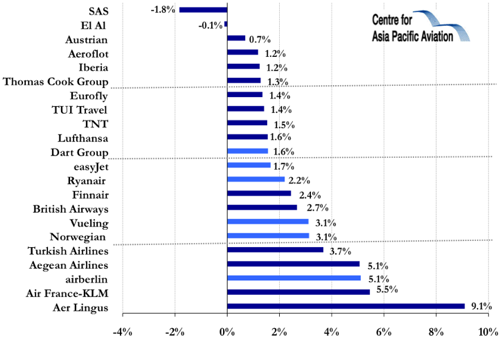