Atlanta International Airport:Whether you go to heaven or hell, you have to change planes in......

This apocryphal saying, already widely in use by 1980 when Time Magazine did a story on Atlanta (ATL) airport, sums up the range of feelings engendered by the facility. By being the busiest airport in the world it has created its own aura and, even amongst non-travelers, evokes images of a sea of humanity bustling to, from or through the terminals.

Not only that, if you live in or are bound for Atlanta, the overwhelming possibility is that you will fly Delta. Today's story of Atlanta is inseparable from that of its hub carrier. It was not always so. Prior to its demise, Eastern Airlines, too, was a powerful player at the airport. Similarly the substantial intercontinental network now operated at the airport had humble beginnings in 1971 when Eastern operated the first international flights, connecting Mexico and Jamaica to the airport. It was not until 1978 that the first foreign carrier, Sabena, began operating there.

The airport has grown partly because of its geography; sited as an ideal connecting point for the southeast. But its expansion also reflects the explosive growth of the city of Atlanta and the southeastern United States in general. From 2000-2006 the Atlanta metro area led the US in terms of growth, which has catapulted the region to the 8th largest metro region in the nation.

Th following table shows the historical development in the battle for supremacy at Atlanta. In 1980, two years after deregulation, the players were essentially unchanged, with Delta and Eastern going head-to-head to the major destinations shown.

By 1985, routes were being challenged by other developing hub carriers as well as a number of new entrants willing to vie with the incumbents for traffic—most of which subsequently failed.

However, by 2000, the battle lines that still exist had been drawn and the influence of hub carriers and their desire to dominate is readily apparent. Eastern has disappeared and AirTran has emerged as a low-cost alternative to Delta at ATL. American’s prominence at Miami has begun to emerge and Delta’s focus on DFW as an alternative connecting hub will soon be ended.

In 2010, the players are essentially unchanged and the role each carrier plays in the Atlanta service grid is even more codified. Regional jets have replaced mainline equipment on many services, providing uplift for point-to-point passengers - but also the recognition by competitors of the reality that most Atlanta residents are not going to connect over Chicago or Dallas to reach destinations beyond. Consequently, both UA and AA operate many flights to Atlanta with smaller aircraft.

Delta effectively owns Atlanta; a phenomenon typical of many hub airports in the US—particularly those in the East. However, given the fact that Atlanta is the world’s busiest airport, this dominance has added importance.

In light of this reality, Airtran, which still has its largest concentration of services at Atlanta, has at the same time expanded more vigorously at its focus airports, the latest of which is Milwaukee (MKE). Their 2008 annual report confirms that they have “expanded our route structure by increasing the amount of non-Atlanta related operations from approximately ten percent of our daily operations as of December 31, 2001, to approximately 38 percent of daily operations in January 2009”. Given the expansion at MKE in 2009, the ATL percentage has probably further declined.

Thus, any resident living in the proximity of ATL will most likely fly Delta. Internationally the market share dominance of Delta is even more striking, at nearly 80% market share by capacity.Add the lift provided by Delta’s SkyTeam partners and the share is almost 93%.

But Atlanta is mostly a domestic airport

Atlanta may be big in many respects, but airline competition is not one of them. Interestingly, five of the top 10 international destinations are not cities with SkyTeam hub advantage. However, despite its size, Atlanta is overwhelmingly a domestic airport with only 11% of its seats involved in cross-border travel. Contrast that with JFK where the international slice is 49%.

...where its major city pair dominance is extreme

Broken down by top domestic markets, Delta’s dominance is even more pronounced. Looking at the service between ATL and New York (all airports), Delta is the only carrier serving all three major airports and Westchester (HPN) with AirTran only at Laguardia and HPN and Continental’s service centered on Newark.

The same is true at number two, Washington, where Delta provides the overwhelming number of flights to Reagan, Dulles and BWI.

The following table illustrates that, for the first 8 months of 2009, Atlanta has experienced drops in movements, passengers and cargo.

However, the decline in passenger numbers in both the domestic and international sectors was less than reduction in number of movements, indicating higher load factors. Like everywhere else, yields were likely down. 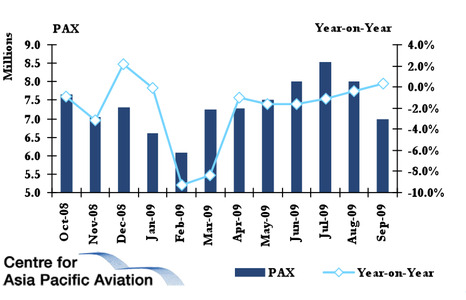 The superlatives will probably continue to be applied to the facility.

Aside from being the busiest airport in the world, Atlanta International Airport is also, cumulatively, the state of Georgia’s largest employer. With 5 parallel runways, including one of the very few new runways opened in the US in the last decade, it has a maximum hourly capacity of just under 240 flights per hour.

Owned and operated by the city of Atlanta, the airport derives over half of its revenue from non-aviation activities as shown below. Over 60% of the airport’s passengers are in direct transit, making it a key component in both the US domestic and global air networks.

However, Ben DeCosta, the airport’s general manager, reported at ACI in Kuala Lumpur that in August, 2009, all of the airport’s revenue sources were in decline, with parking down 6.1%, concessions off by 3.6% and car rentals a whopping 13.1%. In response, the airport has been looking at ways to defer capital expenditure.

In the recent merger of Delta and Northwest, Atlanta, as the world’s busiest airport, was the clear winner. Being home to the world’s largest airline makes it unlikely that it will be toppled from its position anytime soon. If size matters, Atlanta wins.