The creditor support came after the company’s creditors and controlling family reached an agreement following the close of trading on 08-Feb-2010 that private assets of the group’s owners would be put up for collateral for fresh loans, as a means to save the group from a liquidity crisis.

JAL to remain with oneworld

Also in North Asia, Japan Airlines’ soon-to-be-delisted shares remained neutral, while shares in Qantas slipped 1.4% yesterday and Cathay Pacific gained 1.2%, as JAL announced it would remain with Delta Air Lines and oneworld. Qantas' shares had closed before the JAL announcement and have risen 1.4% in morning trade today.

Meanwhile, Indian shares climbed 0.7% on Tuesday, for three consecutive days of gains. Among the Indian airlines, Jet Airways rose 2.4%, on reports that the carrier is in talks with FedEx Corp to launch a dedicated cargo airline. Shares in Kingfisher and SpiceJet, however, were both weaker, down 0.7% and 3.6%, respectively. See related article: Indian airline financial wrap 3QFY2009/10: Jet Airways, Kingfisher Airlines, Air India and SpiceJet 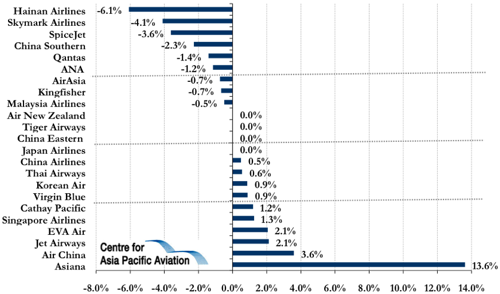