Asiana Airlines and Korean Air enjoyed the biggest Asia Pacific share market gains in 1H2010, with their stocks surging 155% and 49%, respectively, on resurgent earnings and improving outlooks. Virgin Blue was at the other end of the scale losing almost 50% of its share market value over the past six months as investors fret about its prospects.

Asiana Airlines led the way in 1H2010, thanks to surging cargo demand as the world economy showed more promising signs. Asiana was also the strongest performing stock on the KOSPI Index (of companies with a market capitalisation in excess of KRW1 trillion), while Korean Air came in tenth, with its 49% increase in 1H2010.

Taiwan’s China Airlines and EVA Air gained 45% and 35.7%, respectively, on rising cross-Straits links, while Thai Airways surged 37% over the first half as political turmoil eased, raising the prospects for improving volumes of travellers to Thailand in the second half. 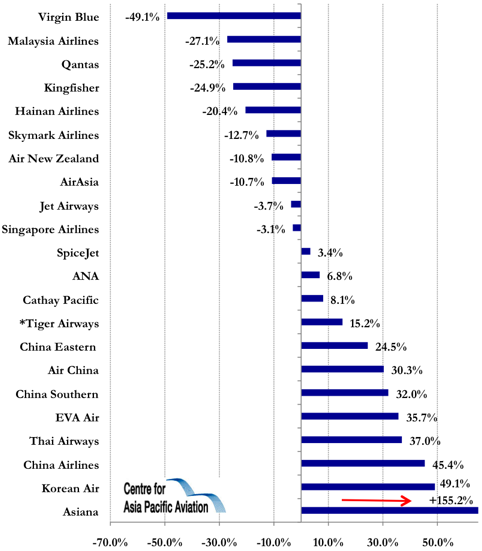 The premium players – Cathay does best

Cathay Pacific (+8.1%) significantly outperformed Singapore Airlines (-3.1%) and Qantas (-25.2%), due to its exposure to the booming Chinese market, while the latter two continue to feel the lingering effects of the global economic downturn. See related report: Qantas not out of the woods as load factors slump and yields remain stuck below 2008 levels

Unaligned Malaysia Airlines was the second worst performer in the region, with its stock losing 27% in the half.

Of the LCCs, Tiger Airways gained 15.2% since its listing on 22-Jan-2010 on robust traffic performances that have seen the airline regularly bring forward aircraft orders from Airbus. AirAsia meanwhile fell 10.7% in the first half on concerns it may have too many aircraft on order.

In India, SpiceJet gained 3.4% (helped by an ownership change in the half, as well as improving earnings prospects), while Jet Airways fell just under 4% and Kingfisher slumped by a quarter. See related report: Mid-year outlook for India's airlines: positive trading conditions

Virgin Blue struggled again in the first half of 2010, particularly the second quarter which included consecutive profit warnings. New CEO, John Borghetti, has announced a wide-ranging review of the airline’s operations and branding, but meanwhile the carrier’s load factors continue to deteriorate. 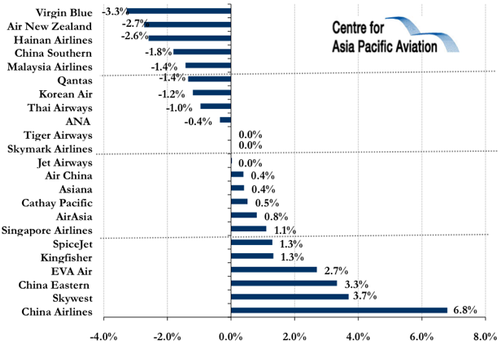