Asiana Airlines’ shares soared 15% yesterday on rumours that Kumho Asiana's creditors may not ask for a capital reduction, and an improving traffic outlook.

The carrier’s shares had trailed rival Korean Air amid concerns related to its parent Kumho Asiana's creditor-led restructuring. But Asiana’s shares have been rising after the carrier reported record Feb-2010 traffic, which continued into March, thanks to resurgent demand in the short-haul leisure market, where Asiana is more strongly positioned.

SpiceJet advanced 7.3% on reports in the Daily News & Analysis paper that Religare Voyages Ltd may acquire a majority stake in the Indian LCC. Religare may pay INR70-75 per share the newspaper reported, without citing sources. SpiceJet has since denied it is in discussions with Religare.

Meanwhile, Macquarie Group has picked China Southern Airlines among the Chinese airline stocks, citing a higher proportion of its expenses in foreign currencies while most of its revenues are in yuan (which is expected to appreciate). 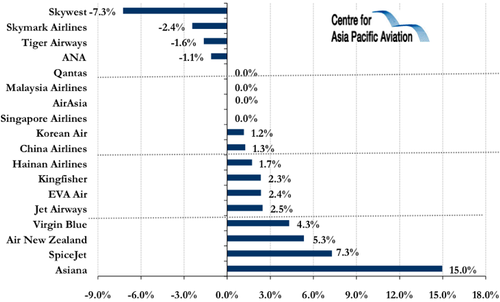 Source: Centre for Asia Pacific Aviation & Reuters
*It was a public holiday in Hong Kong and Thailand on 06-Apr-2010