Asiana Airlines shares slumped 12.5% on Friday to their lowest level in over a month on concerns about a capital write-down of Asiana Airlines, in return for a fresh injection of funds. Its shares fell as much as 14.7% in intra-day trade.

The Korea Development Bank told Reuters, “we have asked major shareholders [of Asiana] to take some responsibility, including capital write-downs, in return for a new capital injection, [but] nothing has been decided regarding which shareholders should sacrifice how much. The capital write-down may not take place at all, if we find Asiana Airlines financially sound enough”. A review will be completed on the airline by the end of Mar-2010.

Also lower on Friday was Thai Airways, which announced plans to raise up to USD720 million through an issue of new shares. The Thai Finance Ministry will participate, so it can maintain its 51% stake in the airline (although it hinted recently that it may reduce its stake in Thai over the long term - as the Swedish Government is considering doing with SAS. For now though, the governments remain critically involved).

The move would help reduce Thai’s debt-to-equity ratio from 4 currently to 2. The plan is subject to approval by shareholders on 28-Apr-2010. The airline’s shares fell around 5% in intra-day trade, before closing 1.2% lower.

At the other end of the spectrum, Air China continued to soar on last week’s reports of an improved financial outlook and its interest in mergers and acquisitions in domestic and international markets, thanks to its latest capital raising plans (also supported by the government) to create a USD950 million war chest. The Beijing-based carrier’s shares rose 11.1% on Friday to a fresh two-year high. Air China is seen increasing its stake in Shenzhen Airlines, but could be interested in strategic stakes in other Asian airlines. 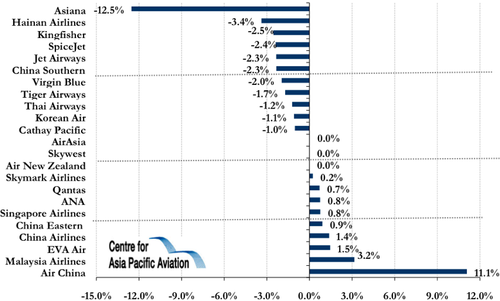