Asian stocks slumped yesterday, on concerns related to the euro zone debt crisis, artillery fire near the border between North and South Korea and expectations that China will take further steps to rein in inflation. The speculation that the government would intensity efforts to tame inflation resulted in China’s benchmark index dropped to a six-week low yesterday.

Kingfisher to consider proposal to sell securities for debt restructuring

Kingfisher Airlines shares plummeting 7.1% yesterday for the largest drop since 27-Jan-2010. The carrier yesterday stated it would consider on 25-Nov-2010 a proposal to sell securities as part of its debt restructuring plan. India’s Bombay Stock Exchange Sensitive Index (Sensex) declined 1.3% yesterday after reporting a 3% reduction in intra-day trading for the steepest one-day drop since Nov-2009.

Qantas shares increased 0.4% yesterday despite the wider market losing value on the airline’s plan to return two of its six A380 fleet to commercial operations and on the prospect of compensation being paid for the fleet's recent engine problems. Qantas shares remain nearly 9% below their 04-Nov-2010 close level, the day an engine exploded on a A380 en-route from Singapore to Sydney. 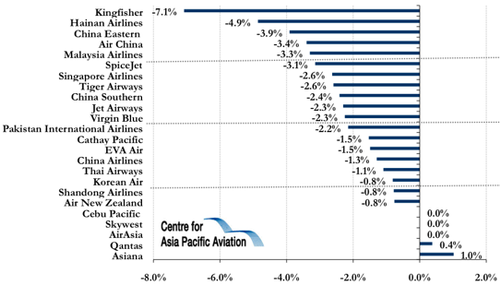