Asian full service airlines “cautiously optimistic” about 2010 prospects, after a pick up in demand

Asia Pacific full service airlines have seen a pick-up in passenger travel and air cargo demand in the early stages of 2010, according to the Association of Asia Pacific Airlines (AAPA). The industry body added that the double-digit year-on-year increases in international passenger and freight traffic provides “further confirmation of an ongoing economy recovery”, which first became evident in 4Q2009. 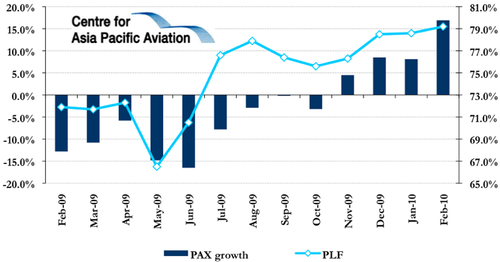 Capacity increased for first time in over 12 months 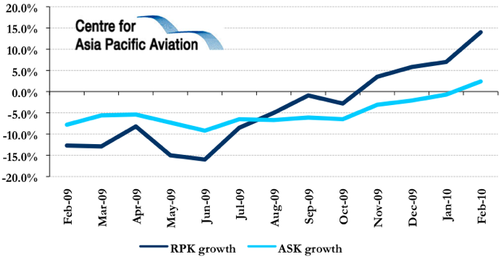 International air cargo demand (FTKs) for the first two months of 2010 has recorded a “dramatic rebound”, rising 33.5% from 2009  - when the industry was suffering from the worst effects of the slump in international trade. 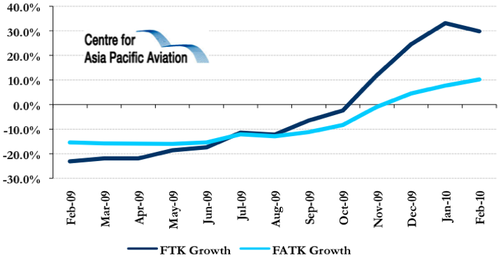 In Feb-2010, AAPA members reported a 29.8% increase in air cargo demand (FTKs) compared to Feb-2009 levels (close to the bottom of the downturn). The average international air cargo load factor for Asia Pacific carriers surged 10.3 ppts year-on-year (to 68.5%), even with a 10.2% increase in freight capacity.

Mr Herman commented that whilst the recent recovery has been led by the more dynamic Asia Pacific economies, “it is worth noting that the rebound in demand for international air cargo has been broadly based, with both exports and imports from other regions showing renewed vigour.”

Outlook: Cautiously optimistic about prospects for 2010, but long road to full recovery

The AAPA traffic results for Jan-2010 and Feb-2010 reveal a “positive start” to 2010, following a disastrous year in 2009, in which Asia Pacific airlines were forced to aggressively cut capacity, reduce costs (though some did better than others) and discount fares to simulate demand.

The prospects are better for 2010, with AAPA stating it is “cautiously optimistic about prospects for the coming year”. However, Mr Herdman commented that while the demand improvement is “certainly welcome”, it needs to be “coupled with careful management of costs and available capacity, if airlines are to succeed in restoring profitability following two years of heavy financial losses.”