The Asia Pacific region has leap-frogged Europe and North America to become the world’s leading aviation market in the first six months of 2010. According to latest sample data from the Airports Council International (ACI), the leading Asia Pacific airports handled close to 500 million passengers in the first half of 2010, up 11.5% over the same period in 2008 (pre-crisis). ACI World Director of Economics Andreas Schimm stated, “North America and Europe remain well behind their respective 2008 pre-crisis levels whereas the other regions have emerged stronger”.

Traffic at the leading European and North American airports fell 7.3% and 7.7%, respectively, over 1H2008, with North America slipping to third place. Growth rates were led by the major Middle East airports, where traffic in 1H2010 was up some 18.4% over the same period in 2008.

Asia Pacific's place at the top of the world rankings is confirmed by the latest OAG airline capacity data for Aug-2010 which also shows North America has fallen to third place, with combined domestic and international capacity of 99 million seats, falling behind Asia Pacific with 109.6 million seats, and Europe with 105.5 million this month.

ACI’s Schimm concluded, “Overall, the global industry in the first half was still almost one percent down compared to the pre-crisis period due to the significant declines in the major regions Europe and North America. The impact of the volcanic ash crisis on Europe’s declining 2010 results further exacerbated the slow return of European international traffic to pre-crisis levels, but it does not overshadow the structural change in the markets of the air traffic industry. It is the strong growth in the domestic markets in China and Brazil that have shifted the balance.”

ACI World reports that “firm passenger demand” brought an 8% year-on-year increase in worldwide traffic growth in Jun-2010, maintaining the “positive momentum” established in the preceding months. International passenger growth contributed strongly with a rise of over 10% and domestic traffic grew by 6%. 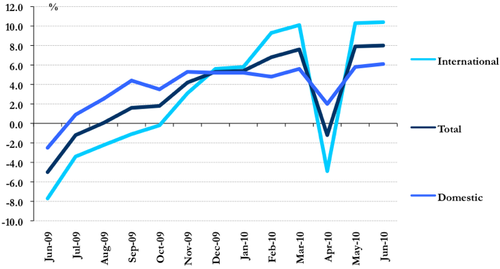 Air freight worldwide continued to grow by over 20% for the seventh month in a row. Jun-2010 results show that major international freight hubs Shanghai, Hong Kong, Frankfurt, Miami, Incheon and Dubai grew by more than 25% compared to 2009.

Comparing to early 2008, total freight tonnage worldwide in the first six months surpassed tonnage shipped in the first half of 2008, the period before the economic crisis took hold. International freight is the driver of this growth, according to ACI, with Asia Pacific and Middle East, up by 4% and 21.5%, respectively. Asia Pacific has further extended its lead in market share to 38% of global air freight tonnage supported by a strong 13% increase in domestic freight traffic, according to the airports body. 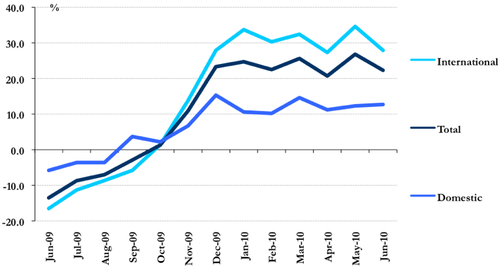