Asia Pacific airlines witnessed some “moderation” in passenger and air cargo demand growth in Mar-2011, according to the Association of Asia Pacific Airlines (AAPA), with the moderation in growth partly as a result of the effects of the Japanese earthquake on travel patterns and trade within the region.

AAPA also warned that despite a positive start to 2011 and a “positive” outlook for continued regional and global economic growth, the “lingering effects from the Japan earthquake will continue to have an impact on patterns of travel demand in the second quarter of the year”. AAPA also stated it remains “very concerned” by the continued rise in oil prices, which are “pushing up the cost of travel and threatening to undermine global economic growth”. 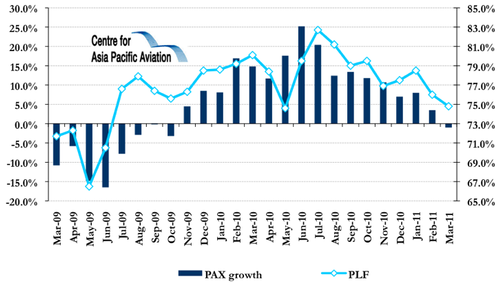 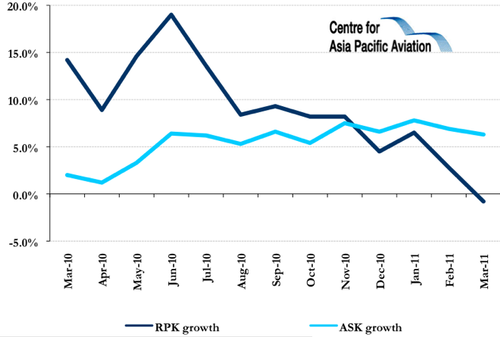 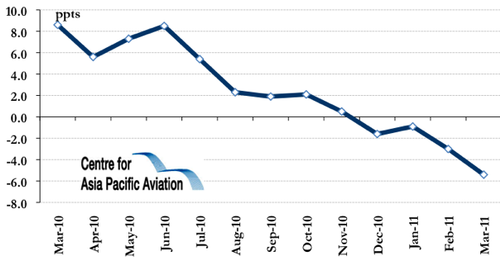 Meanwhile, international air cargo demand (FTKs) increased by 0.4% increase in Mar-2011, following a 4.2% decline in Feb-2011 which was the first month of contractions since Oct-2009. Traffic freight capacity (FATKs) increased 5.0% in the month, resulting in a 3.2ppt decline in average international cargo load factor to 70.4%. 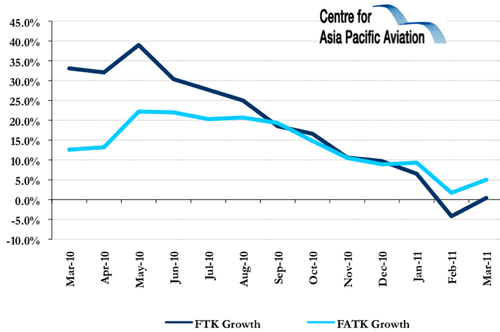 Again, this marks the fourth consecutive month of declines. Freight load factors improved in every month of 2010 with the exception of Sep-2010. 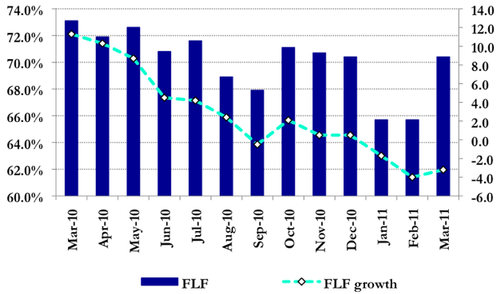 AAPA Director General Andrew Herdman stated the  Mar-201 figures reflect to some extent the consequences of the earthquake in Japan, which led to significant disruptions to normal travel patterns and reduced demand for travel to, from and within Japans in the weeks following the 11-Mar-2011 earthquake and tsunami. Japan represents 6.5% of worldwide scheduled air traffic and accounts for a fifth of traffic within the Asia Pacific region.

Mr Herdman stated demand for business travel has been less affected. However, consumer confidence is still fragile, although there are some “tentative signs of recovery” in leisure travel demand, and a number of trade campaigns have been launched to promote travel and tourism both to and from Japan.  On the cargo front, AAPA noted the important role Japan plans in global production and supply chains, adding that the “air cargo industry is working hard to support efforts to overcome component shortages and restore normal production flows”.

Meanwhile, Pacific Asia Travel Association (PATA)  stated the latest figures from JNTO showed that both Japan’s inbound and outbound demand fell sharply in Mar-2011, by 50% and 18% respectively. Hopes are for a quick return to normalcy sometime from Jun-2011 onwards as the larger part of the country is not affected by the earthquake and tsunami and the on-going issues at the Fukushima Daiichi nuclear power plant.   PATA stated is “hopeful of some form of recovery in the Japan and the Middle East markets in the second half of this year”.

Meanwhile, Pacific Asia Travel Association (PATA) stated international visitor arrivals into Asia and the Pacific in Feb-2011 increased 5% year-on-year with growth of 6% over the first two months of the year. February demand growth was to a certain degree impacted by the shift of the Lunar New Year from the middle of the month in 2010 to the first week of the month this year. 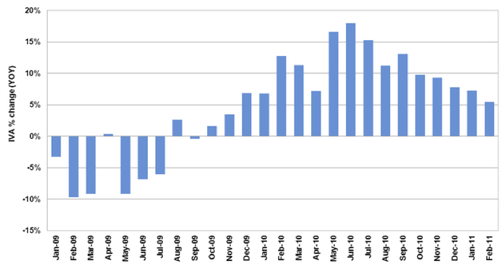 “Moderating growth was to be expected following last year’s impressive recovery. Going forward, economic fundamentals remain strong and the positive momentum is expected to continue but the aftermath of the tragic earthquake and tsunami in Japan and the political unrest in the Middle East and North Africa are expected to have a dampening effect on travel demand in the short-term,” PATA Director Strategic Intelligence Centre Kris Lim said.

South Asia continued to set the pace with the strongest arrivals growth from amongst the four sub-regions covered in Feb-2011mwith a gain of 15%. Two destinations involved in the hosting of the ICC Cricket World Cup 2011, India and Sri Lanka, recorded the fastest arrivals growth of 15% for the month. Arrivals to the Maldives (+13%) and Nepal (+12%) also grew strongly in February.

Travel demand to Southeast Asia remained robust with arrivals to the sub-region growing by 10% year-on-year, with the majority of the destinations recording double-digit gains in arrivals, led by Cambodia (+22%), Myanmar (+29%) and Vietnam (+22%).

Northeast Asia on the other hand registered a significantly slower growth of 3% in Feb-2011, but added 1.4 million more visitors. Chinese Taipei (+17%) maintained strong inbound growth but growth for other destinations in the sub-region were modest ranging from 2% (China, Hong Kong SAR and Japan) to 5% (Macau SAR).

International arrivals to the Pacific rose 4% in Feb-2011, with Australia registering a marginal decline (–0.2%) and New Zealand posting flat inbound growth of 0.2%. Arrivals to Vanuatu and Hawaii surged 71% and 12% respectively but the Marshall Islands and Northern Marianas reported double-digit declines for the month.

PATA also noted that the Middle East market provides some three million visitors to Asia Pacific annually. It is a significantly smaller origin market but one that has enjoyed robust growth in the past five years. However, the political unrest in the region this year has caused some drops in visitor numbers to Asia Pacific. One of the leading destinations for Middle East travellers in the region, Thailand, recorded a 15% fall in arrivals from that region in Mac-2011.