Asia Pacific airports move up the ranks in 2011, with Beijing this year to overtake Atlanta

While Beijing Capital is the dominant airport in China, it is on track to become be the world’s busiest hub by the end of this decade, leaving London and even ambitious Dubai in its wake. And new developments will ensure the city of Beijing has an airport in the top spot: its new airport at Daxing, south of Beijing, could have up to nine runways and ultimate capacity to handle around 370,000 passengers per day, or a staggering 135 million passengers p/a. This would increase capacity at Beijing area airports to around 220 million p/a – almost a quarter of a billion passengers.

Only a decade ago, Beijing Capital did not even rate among the world’s top 30 airports, a list that Atlanta has headed since 1998. Beijing only appeared as one of the world’s 30 largest airports in 2004, in 20th position, with passenger growth of over 43% in that year. The airport quickly moved to become one of the 10 largest airports in the world two years later, in 2006, after holding 15th position in 2005.

China to be scene of growth in the current decade

China will be the scene of growth in the current decade. China, the world’s second largest economy after the US, has considerable growth potential amid rising GDP and disposal income levels. With the Chinese economy expected to become the world’s largest in 2016, its large population is becoming increasingly mobile, with the wealth to travel internationally.

With all of the top 20 cities in China having a population of over 3 million (compared to just two cities over 3 million in the US), the growth over the last decade within the airports sector looks set to continue even if the Chinese people’s travel demands are to be met. Meanwhile, the growth potential of the market is even more evident given the relatively low-levels of propensity to travel in China, with the market having the potential to grow tenfold from current levels if a similar level of propensity to travel is reached as in Europe and the US. This would make China over four times the size of the US travel market. This potential presents considerable opportunities for the aviation industry with the top 30 airports of the world to be increasingly dominated by Chinese airports. 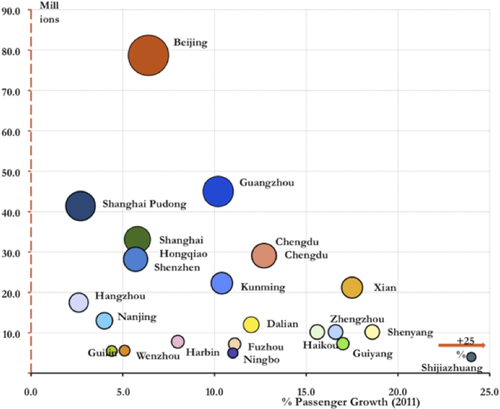 The growth trajectory of Beijing is representative of overall shifts in global aviation and economic trends which has seen Asian airports dominate gains in passenger numbers in 2012, reflecting robust economic growth in those countries and the rising propensity to travel in the region.

1.43 billion passengers in the Asia Pacific region driven by rise in per capita income

Passenger traffic recorded in the Asia-Pacific region in 2011 was 1.43 billion, representing a 5.7% increase for Asia-Pacific area and an 8.4% increase for the Middle East area when compared to 2010 levels. ACI commented, “the key contributors to the global rise in passenger traffic can be attributed to airports in emerging markets. With the rise in per capita income in many of these markets, the demand for air travel has risen correspondingly. Coupled with the fact that many of these regions are home to some of the most populous countries on the globe have helped fortify this phenomenon”.

Commenting on the 2011 traffic results, regional director of ACI Asia-Pacific, Patti Chau said: “Despite all the difficult times we had in 2011, it is rewarding to see that the region has recovered and recorded a healthy and positive growth in passenger traffic comparing to 2010. It proves the resilience of our economy and the strong fundamentals of our region. As for freight traffic, although the result was not as good as we have forecasted, it is still encouraging to see that this region accounted for over 40% of the world’s total traffic and out of the five busiest cargo airports, three are in our region.”

Asian airports will continue to grow in size over the next decade, led by growth in China and as the nation’s numerous second-tier airports expand and boost traffic. The Asia Pacific region overtook North America as the largest aviation market in 2009. By 2014, Asia will account for 30% of global traffic, while North America will fall to 23%. Asia Pacific’s carriers are the most profitable, with net profitability estimated at USD2.3 billion for 2012, following projected profit of USD4.8 billion in 2011. Of the 800 million new passengers who will fly by 2014, 360 million of them will be in Asia Pacific and 214 million of those in China alone, IATA has forecast.

Globally, passenger traffic increased by 4.9% in 2011, with monthly traffic in the year remaining relatively stable in the 3-6% range with the exception of Apr-2012, which saw growth of 10.8% reflecting the sharp decline in passenger traffic for major airports affected by the volcanic ash cloud in Apr-2010, which forced the closure of European airspace. 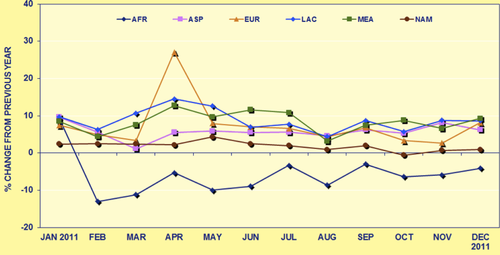 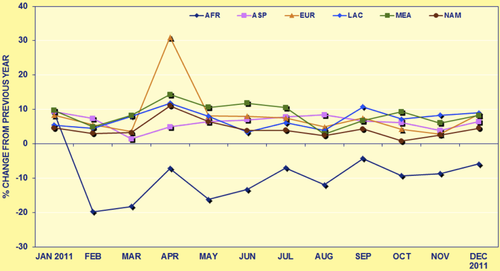 ACI World director general Angela Gittens commented, “2011 could best be described as a year of global uncertainty. Cargo traffic slowed for most of the year as business confidence deteriorated in light of the looming Eurozone debt crisis. International passenger traffic remained relatively unaffected by economies in Europe and North America teetering towards recession. Despite economic instability and political unrest in many regions of the world, overall, airports continued to experience sustained global passenger growth as compared to 2010.”

Meanwhile, London Heathrow displaced Chicago O’Hare to rank third by passenger traffic in 2011, taking back the position lost to Chicago O’Hare in 2010, after disruption from strikes and volcanoes decreased in 2011 compared to 2010.

Besides the five Asia Pacific airports, two other airports in the global top 30 achieved double-digit jumps: Istanbul and Amsterdam. Istanbul entered the ranking after a 16% increase in passenger traffic in 2011, while Amsterdam Schiphol reported growth of 10% to become Europe's fourth largest airport at the expense of Madrid, which witnessed a 0.4% year-on-year reduction in passenger levels. Barcelona, which was not in the top 30, reported growth of around 18% to 34 million passengers, amid a terminal extension and increased operations by Ryanair and easyJet. Moscow’s Domodedovo and Sheremetyevo hubs both achieved growth of around 16%.

Overall, passenger traffic at European airports remained robust in 2011, increasing 7.3% in the full year to around 1.5 billion, or by 5.2% when adjusted to compensate for the impact of the 2010 volcanic ash crisis and exceptionally harsh winter conditions. Despite the economic downturn in the euro zone, ACI noted: “Europe still continues to be the global epicenter for air travel”.

Commenting on the regional results, ACI Europe director general Olivier Jankovec said: “With Europe’s airports welcoming more than 100 million additional passengers in 2011 compared with the previous year, air traffic has once again shown its resilience in the face of a difficult economic climate. This performance hides a significant divide between EU and non-EU airports, with the latter growing twice as much. However, it is worth noting that in almost all EU markets, the growth in passenger traffic strongly outperformed GDP growth, allowing many airports to post record passenger volumes. This is clear evidence of the dynamism of airports as vital economic assets. Airports are the ones that deliver external trade and the associated growth opportunities to their communities – all too relevant at the moment.” The statement will be a welcome one for carriers battling new taxes, such as the EU Emissions Trading Scheme (EU ETS), or increased Air Passenger Duty (ADP) in the UK.

ACI World noted, “with the combined effects of economic woes from pending austerity programs and overall domestic capacity constraints in air transport, only modest growth in passenger traffic was observed in North America at 1.8%”.

There are still, however, more US airports in the top 10 airports than any other region, with Atlanta, Chicago O’Hare, Los Angeles and Dallas among the world’s 10 largest airports. However, a decade ago, US airports held the top three positions and had five airports in the top 10. Meanwhile, Orlando fell off the top 30 list in 2011, after placing in the list over the past decade and holding the 29thposition in 2011. Two of the four top 30 hubs that saw passenger levels decline in 2011 were from the US: Chicago O’Hare (-0.5%) and Houston (-0.8%), joining Madrid (-0.4%) and Tokyo Haneda (-2.9%), which suffered as a result of the 11-Mar-2011 earthquake and tsunami.

In contrast, more robust growth was experienced in Latin America (+8.6%). A standout was passenger traffic in Rio de Janeiro, which grew by 20.5% year-on-year in 2011. Meanwhile, air travel in Northern Africa felt the impact of political unrest, which had a direct and negative impact on air travel in the region, with a year-on-year decline in passenger traffic of 5.9%.

2012 traffic growth is again being driven by emerging markets, with the Asian airports of Jakarta, Bangkok Suvarnabhumi and Beijing continuing to be strong contributors to growth patterns for the region as a whole but are among the fastest growing high volume airports globally. The combined effect of rising demand for air travel and a strong demographic weighting have led these airports to experience exponential growth over the decade. However, capacity growth will likely be impacted by fuel costs and national aviation taxes, with this to have a particular impact on regional airports. 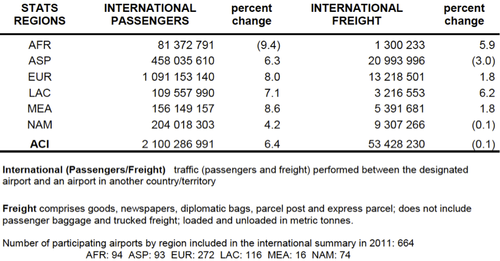