Hainan Airlines, the major carrier at the airport, forecasts that 2009 passenger traffic would increase 36.1% year-on-year to 19.6 million, while cargo traffic is expected to increase 52% to 284,200 tonnes.

Malaysia Airports also traded up strongly, gaining 3.3%. AirAsia announced more routes at the beginning of the week, as part of plans to develop Penang into its eighth hub.

European airports were far more subdued, mostly on the back of continued poor traffic results from European full service airlines and the airports themselves. However, resilient traffic from European LCCs is providing a ray of hope, with Ryanair and Norwegian Air Shuttle both reporting double digit increases in passenger traffic in June, albeit at the expense of yield, in Norwegian's case. 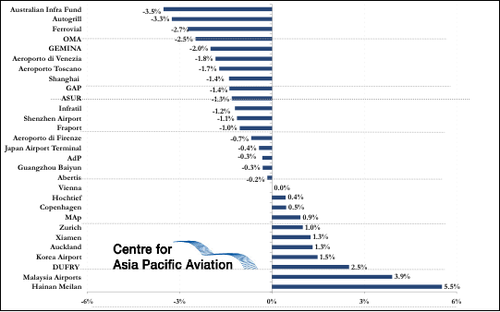