AAPA Director General Andrew Herdmann said: “Asian economies have been leading the way out of the global downturn and this has resulted in a tremendous boost to the fortunes of carriers across the region. Asian carriers have responded to these increases in demand with disciplined capacity and yield management, which has generally been rewarded by a welcome return to profitability, following two very difficult years for the industry.” 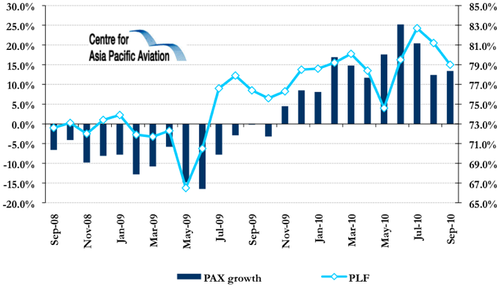 Overall international passenger traffic (RPKs) carried by Asia Pacific airlines increased 9.3% outpacing a 6.6% capacity (ASKs) expansion which was the highest rate of year-on-year capacity growth since prior to Jan-2007. The capacity growth in the month came off a 6.1% contraction in Sep-2009. 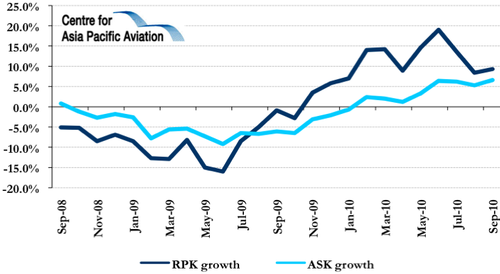 As a result of this demand-supply balance, load factors increased 1.9 ppts to 79.0% for the 14th consecutive month of load factor growth.

In the nine months ended Sep-2010, AAPA carriers have witnessed a 14.6% increase in passenger numbers and an even more dramatic 39.2% increase in international air cargo traffic. 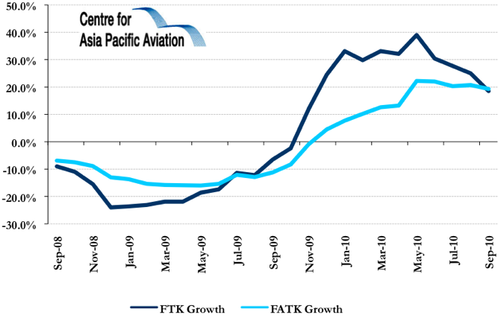 2010 has been a much-improved year for Asian carriers which have witnessed an amazingly rapid recovery from the lows of 2008 and 2009 when carriers were forced to rigorously cut capacity, aggressively reduce costs and severely discount fares to simulate demand, resulting in yield pressures, lower revenues and heavy losses for most carriers in the region.

According to IATA, Asia Pacific airlines reported combined net losses of USD7.4 billion over 2008 and 2009, with a loss of USD4.7 billion in 2008 and USD2.7 billion. But what a difference a year can make: the region’s airlines are now anticipated to be the most profitable in 2010 with a net profit of USD5.2 billion forecast and USD3 billion in 2011.

The Asia Pacific aviation industry has benefited from strong economic and demand growth in markets such as China and India. AAPA stated: “Asian consumers are already displaying confidence in the future. At the same time, a broad pickup in business sentiment is evident in the marked recovery in demand for premium-class seats, a segment of the market in which Asian carriers have traditionally excelled.”