Asia Pacific airlines have seen only “modest revenue growth” in 2011 as a result of “slightly slower than expected growth in the passenger business, and a lacklustre air cargo market” combined high fuel costs, according to the Association of Asia Pacific Airlines (AAPA). AAPA added that “airline margins have been severely squeezed, with profitability suffering accordingly."

AAPA Director General Andrew Herdmann also cautioned that while economic growth rates in Asia remain positive, “recent signs of a further slowdown in the US and Europe are a cause for concern, adding further uncertainty to the global outlook for the rest of the year”.  However, despite these economic concerns and fuel price pressure, he noted that there is optimism in the region about future growth opportunities, which is "underpinning ambitious fleet expansion plans, as well as the establishment of a number of new airlines, including international partnerships and joint ventures.”

Asia Pacific airlines have some 3000 aircraft on order, building on an in service fleet of 6265 aircraft, according to Ascend. There has also been considerable activity in recent weeks in terms of international partnerships and JVs, including a proposed MAS-AirAsia alliance, the establishment of Jetstar Japan and AirAsia Japan LCC subsidiaries in Japan, and approval for the Qantas-American Airlines joint business. 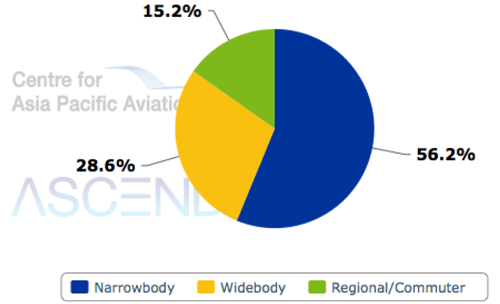 Jul-2011 traffic figures for Asia Pacific flag carrier members of AAPA showed a continuation of recent trends which have been characterised by steady growth in international air passenger travel but weakening freight demand.

Collectively, airlines based in the Asia Pacific region handled 17.4 million international passengers in Jul-2011, a 5.2% year-on-year increase. Passenger numbers have increased in all but one (Mar-2011) month of 2011 and in every month of 2010. 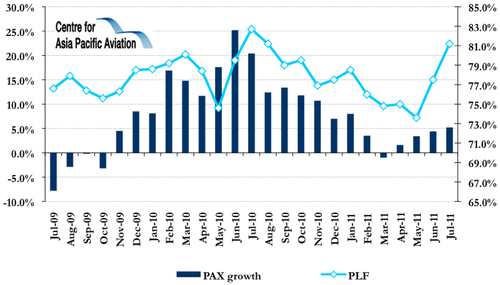 International traffic (RPKs) increased by 6.4%, driven by increased demand for long-haul travel during the holiday season, although this was outpaced by a 6.8% increase in capacity (ASKs). As a result, the average international passenger load factor declined marginally, by 0.3 ppts to 81.2%.

International capacity growth at Asia Pacific airlines has exceeded traffic growth for the past seven months, and for every month of 2011. As a result, loads factor have also declined for the past eight months (Dec-2010 through Jul-2011) after 16 consecutive months of gains from Aug-2009 to Nov-2010. 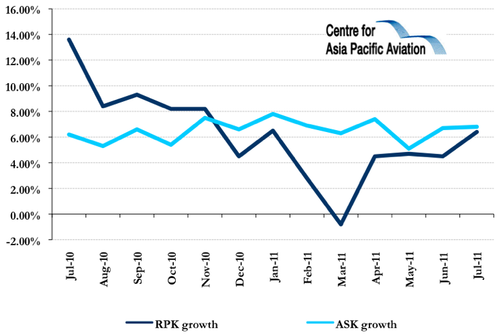 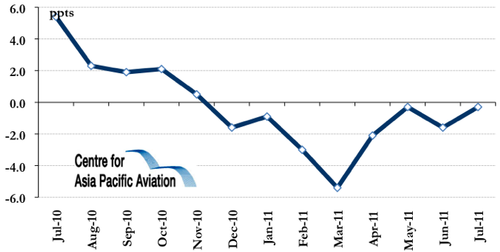 This scenario is not limited to Asia Pacific airlines. IATA earlier this month reported that load factors are now down on their 2010 peaks, and with demand-supply conditions weakening prospects for significant further yield increases are waning.  IATA similarly reported that while the trend for air travel remains upwards, the outlook for air freight is now “little better than flat”.

International cargo demand (FTKs) declined 4.0% in Jul-2011, for the fourth consecutive month of year-on-year decreases amid a slow down in Asian export demand following the strong rebound in 2010. Load factors also weakened, by 2.9 ppts to 66.9%. 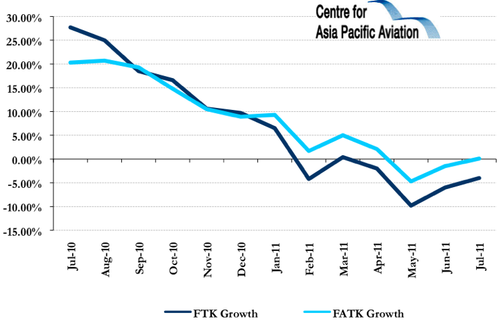 IATA has previously forecast that global cargo markets (which Asia dominates) and airline profitability will be squeezed in the second half of 2011, amid slowing economic growth and excess capacity in bulk and container shipping. Air freight volumes peaked in 2Q2010 amid the post-recession replenishment of inventories. Growth rates have declined steadily since then, especially within Asia. The spectacular rebound of air freight demand in China over the past two years came to an abrupt halt in 1H2011.

In the seven months to Jul-2011, AAPA airlines handled 109 million international passengers, a 3.4% year-on-year increase. Mr Herdmann noted that growth rates were “held back by the substantial decline in Japanese traffic as a result of the earthquake, but this market is recovering, albeit slowly”. This commentary has been supported by recent observations by ANA and JAL in their Jun-2011 quarter financial results in recent weeks.

Meanwhile, international passengers load factors have declined by 1.9 ppts to 76.7% in the year-to-date period, due to the supply-demand imbalance.