Asia Pacific airline stocks were down virtually across the board yesterday as the Ash Attack sent airline investors heading for the exits around the world.

Qantas (-2%) is experiencing losses before taxes of up to USD2 million per day due to the cancellations of its European services. Singapore Airlines slumped 3.6% as UOB-Kay Hian Research stated SIA would suffer the biggest losses from the airspace shutdown among Asian carriers. UOB-Kay Hian Research said the disruptions would result in net losses of approximately USD2.7 million per day in SIA's passenger and cargo business, as the carrier generates about 25% of its revenue from Europe.

Thai Airways continued to slide, falling a further 1.8% yesterday as Thai Finance Minister, Korn Chatikavanij, stated he expects inbound tourist arrivals to be “decimated” this year due to the recent civil unrest in Bangkok. Thai Airways yesterday reported passenger traffic (RPKs) rose 13.3% year-on-year on the back of a 10.3% increase in capacity (ASKs), resulting in a 2.1 ppts increase in load factor to 78.9% in Mar-2010. The carrier added preliminary Apr-2010 results show a reduction in international passenger numbers to Thailand due to the political protest. The airspace closures will exacerbate Thai’s traffic downturn this month. 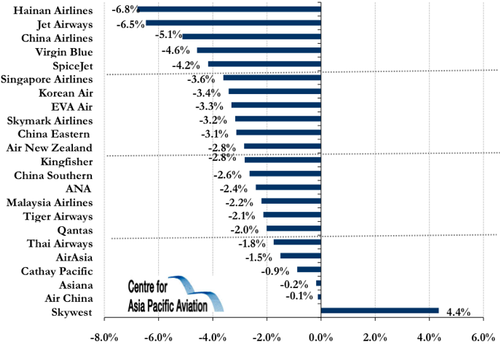