IATA reported that the aviation industry “continues to recover faster than expected”, driven by strong Asia Pacific demand. Asia Pacific carriers recorded the most significant demand improvement at 15.5% in Jun-2010, with China continuing to be the region’s growth engine.

China Eastern led the advances among the Chinese airline stocks yesterday, rising 5.0% in Hong Kong and 5.6% in Shanghai, for the highest close since 06-May-2010. The stock had its rating raised from “underweight” to “equal-weight” by Morgan Stanley, who commented that the company’s near-term earnings momentum is “extremely strong,” helped by a boost from the World Expo in Shanghai. The event has attracted record crowds in the commercial hub.

The carrier explained: “During the period, the demand for aviation and transportation services increased gradually as a result of rapid domestic economic rebound. The company actively boosted its revenue level by taking advantage of such improved market and achieved the steady growth of its operational efficiency. Further, the net profit attributable to the equity holders of the company for the first half of 2010 was substantially increased, due to the completion of the disposal of its equity interest in MTU Maintenance Zhuhai Co Ltd and a lower base figure for the corresponding period in 2009”.

Meanwhile, shares in Korean Air and EVA Air fell 5.1% and 2.5% respectively yesterday, as BofA Merrill Lynch Global Research cut its rating for both carriers from “buy” to “underperform”, citing a possible decline in the cargo market. Asiana Airlines' shares were also weaker yesterday, down 4.1%, despite the benchmark Kospi finishing 0.3% higher yesterday. 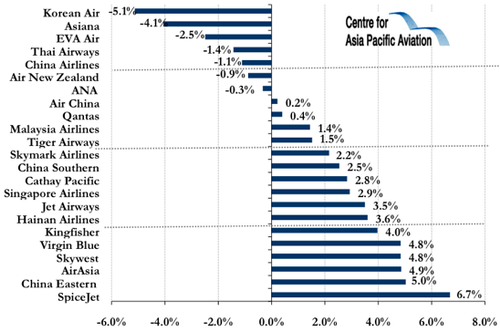