Asia on the ascent: another five Asian airports reach 60 million annual passengers in 2017

Fourteen airports handled more than 60 million passengers in 2016: four in Asia, four in North America, five in Europe, and one in the Middle East. The four Asian airports were all from North Asia – Beijing Capital, Tokyo Haneda, Hong Kong International and Shanghai Pudong.

Another five Asian airports reached 60 million annual passengers in 2017, along with one airport from another region (Denver from North America).

Two other airports in Southeast Asia, Kuala Lumpur International Airport and Jakarta Soekarno-Hatta, handled almost 60 million passengers in 2017 and should reach the milestone in 2018.

(Note: Airports have not yet reported annual traffic figures for 2017, but CAPA was able to determine which airports surpassed 60 million based on partial year figures and, in some cases, announcements that the 60 millionth passenger had been put through.)

Outside Asia, Denver International Airport also surpassed 60 million annual passengers for the first time in 2017, reaching the milestone on 23-Dec-2017. Therefore, the number of airports from North America with at least 60 million passengers grew from four to five, matching the figure from Europe. Based on seat capacity data for the first week of 2018, Denver does not make the top 20.

Amsterdam Schiphol, which reached 60 million annual passengers in 2016, also does not make the top 20. However, the other 18 airports that handled at least 60 million passengers in 2017 are also in the current global top 20 ranking by seat capacity.

Jakarta and Kuala Lumpur make the above chart, possibly due to seasonal fluctuations in capacity. As previously highlighted, both airports likely fell slightly short of the 60 million passenger mark in 2017.

As highlighted earlier in this report, Kuala Lumpur International and Jakarta Soekarno-Hatta should reach 60 million annual passengers in 2018. Mumbai in India, Taipei in Taiwan and three airports in mainland China will likely reach 60 million passengers within the next few years – Chengdu, Kunming and Shenzhen.

Asia’s top 10 airports have generally been growing at a slower pace than the next 10 largest airports in the region. This is partly due to infrastructure constraints at Asia’s largest airport, but also reflects growing demand at smaller hubs and, in the case of China, secondary cities. 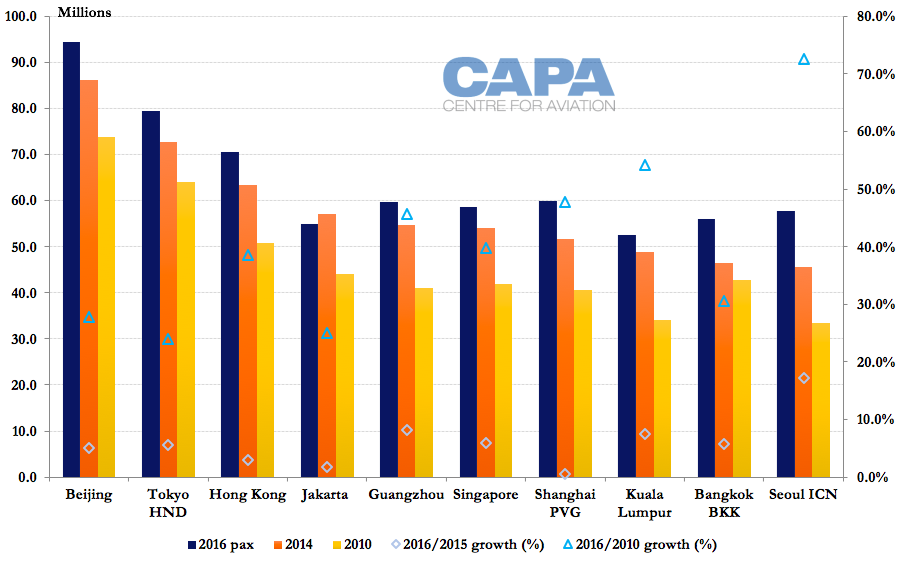 Asia is booming, but some airports are better placed to grow than others

Jakarta Soekarno-Hatta is no longer one of Asia’s 10 largest airports.

In 2014 Jakarta Soekarno-Hatta was the fourth largest airport in Asia – behind only Beijing Capital, Tokyo Haneda and Hong Kong International. Jakarta’s rapid descent in the rankings highlights how important it is to invest in airport infrastructure.

Overall, passenger traffic in Asia is on a rapid ascent, and Asia will continue to be the world's fastest-growing region. However, the additional traffic will not be evenly distributed. Medium to large airports with sufficient infrastructure are best placed to benefit.

Therefore, more airports in Asia will continue to reach the 50 and 60 million passenger milestones, whereas some of the region’s largest hubs will experience growth that is much slower than the regional average.