Asian stocks neared 22-month highs on 07-Apr-2010, as the World Bank sharply raised its forecasts for economic growth in East Asia to 8.7% (up from a previous 7.8%), led by strong growth in China.

The upbeat mood was also reflected in commodity markets, with oil prices nearing 18-month highs. Hong Kong shares were among the strongest risers yesterday, with the Hang Seng Index up as high as 1.5%, after a five-day holiday weekend.

Virgin Blue licensed engineers have voted in favour of a strike of up to two days and other work bans, after the Australian Licensed Aircraft Engineers Association Union and Virgin Blue failed to reach an agreement on a number of issues, including the use of baggage handlers in roles previously filled by engineers. The union stated the industrial action may be launched next week and it is likely the action will result in grounding of aircraft. Virgin Blue and the union plan to hold another meeting today to resolve the issues, with ALAEA stated the carrier has so far only offered “lip-service” in its negotiations. Engineers have also requested a 4% p/a pay rise, higher than the carrier’s proposed 3% increase.

Meanwhile, Qantas has rejected what is states are false claims by the Association of Professional Engineers, Scientists and Managers, Australia (APESMA) that the airline has not shared details of technical incidents with senior engineering staff. Group Executive Government and Corporate Affairs, David Epstein, described the union’s latest claims regarding recent aircraft technical incidents as an "opportunistic attempt to use scare tactics around safety to advance its industrial agenda".

Kingfisher Airlines to raise over USD100 million through sale of GDR; on track for profitability in FY2011/12

In India, shares in Kingfisher were up marginally (+0.6%), on reports that the carrier plans to raise over USD100 million in the next six to eight weeks, through the sale of Global Depository Receipts, to fund working capital requirements and boost the carrier’s balance sheet. Meanwhile, UB Group CEO, Ravi Nedungadi, stated the carrier is expected to turn profitable from Fiscal Year 2011-12.

SpiceJet stated it is not in ownership talks with Religare

Also in the Indian market, shares in SpiceJet slipped 4.3%, following the previous day's 7.3% gain, as the carrier, after market close on Tuesday, stated it was not in discussion with air charter and travel business firm, Religare Voyages, to sell a may acquire a majority stake in the Indian LCC, as reported by DNA.

In North Asia, shares in China Southern and China Eastern advanced by 5.2% and 3.0% respectively. Shares in Air China slipped 1.1%, while Cathay Pacific’s shares gained 2.2%, as the carriers announced further details of plans to increase Air China Cargo's registered capital, through the acquisition, by Cathay Pacific, of a 25% stake in the cargo carrier, for a capacity contribution of USD125 million. Cathay will sell four B747-400BCFs to the new Shanghai-based venture. Ownership in the cargo airline by Air China will be reduced from 75% to 51%.

Also in the region, shares in Asiana Airlines gained a further 5.6% yesterday, on prospects that turnaround plans at the carrier’s troubled parent, Kumho Asiana Group, may progress smoother-than-expected, and as Kumho Petrochemical stated it was profitable in 1Q2010. 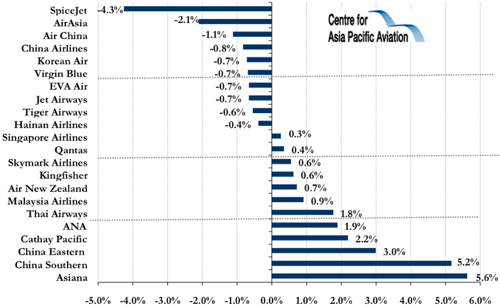