Armavia suspended operations on 01-Apr-2013 after filing for bankruptcy amid mounting debts. The Armenian national carrier was, until then, the largest carrier operating from Armenia with services across Eastern and Central Europe and into the Middle East.

The loss of Armavia has resulted in capacity to/from the country reducing by about 23%, according to CAPA and Innovata data. But already three carriers from Western Europe have agreed to increase capacity to Yerevan in the wake of Armavia’s suspension of operations. A number of Eastern carriers also plan to launch services to the country as part of their summer 2013 programmes.

Armavia’s financial issues were apparent in late 2012 with Yerevan Zvartnots International Airport temporarily suspending the servicing of the airline’s aircraft twice within one week in late Oct-2012 due to unpaid debts of USD3.3 million. This was above the agreed debt level of USD1 million.

Large debts to both Armenian and Russian organisations

Armavia’s liquidity issues saw the Armenian Government state its tender with Armavia may be terminated. The government planned to announce a decision on the future of its tender agreement with Armavia on 22-Apr-2013.

The airline also reportedly had debts to fuel suppliers. Meanwhile, Sukhoi reportedly stated plans to sue the airline for over USD1.385 million in relation to a debt for the unfulfilled terms of an agreement for SSJ100 aircraft. Armavia’s total debt (including debts to both Armenian and Russian organisations) is yet to be disclosed but may increase if Sukhoi’s lawsuit is successful.

Armenia’s aviation market is purely international, with no domestic air transportation networks. The majority of air traffic to the nation is to Yerevan Zvartnots International Airport, handling about 97% of total traffic, with the remaining 3% of traffic handled by Gyoumri Leninakan Airport.

Up until Armavia’s bankruptcy, Armavia was the largest carrier operating from Armenia and was based at Yerevan Zvartnots International Airport. Armavia operated a network of 18 destinations, with its main market being Eastern and Central Europe. According to Innovata data, Eastern and Central Europe accounted for about 95% of Armavia’s total capacity while the Middle East accounted for the remaining 5%. The airline operated around 10,200 seats on its European network and only about 500 weekly seats across its Middle Eastern network.

The airline’s network was operated using a fleet of seven aircraft including one A320, three Boeing 737-500s and three Bombardier CRJ200LR aircraft. In late 2012 the airline also operated a SSJ100 aircraft however this was returned to Sukhoi due to a dispute between the airline and manufacturer over maintenance costs. 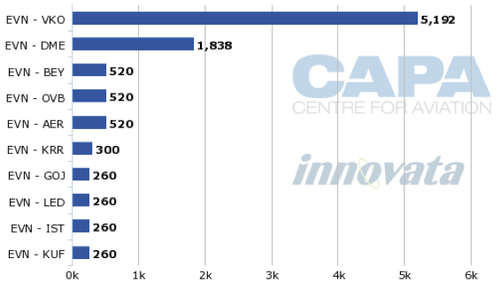 Yerevan Zvartnots International Airport served 25 airlines (including Armavia) at the time of Armavia’s bankruptcy with 34 passenger destinations (30 to Europe, three to the Middle East and one to Asia-Pacific). Eastern and Central Europe is Armenia’s main market, with around 85% of total capacity (about 39,000 seats) attributed to the region. This is followed by Western Europe, the Middle East and Central Asia with around 8%, 7% and less than 1%, respectively. The majority of airline traffic to and from Armenia is full service, as LCCs account for about 3% of capacity in the market. 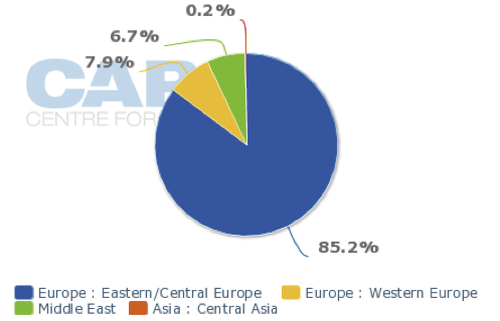 Armavia was the leading carrier in its home market but not by a large margin. Based on schedules originally filed for the week commencing 1-Apr-2013, Armavia accounted for 23% of capacity in Armenia.

Post-Armavia, the four Russian carriers of S7 Airlines, Aeroflot, Donavia and UTair Aviation have become the leading four carriers in the Armenian market. A fifth Russian carrier, Transaero Airlines, also makes the top 10 list of airlines into Armenia based on weekly seats offered in the market. 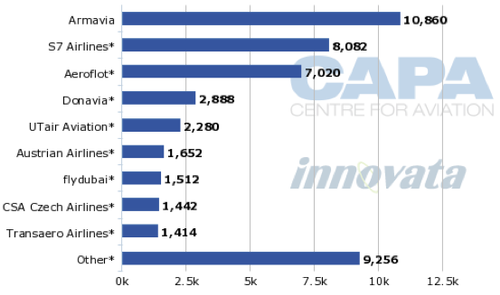 European low-cost carriers may also identify opportunities in the market with Armavia’s exit. UAE low-cost carrier flydubai was already the seventh largest carrier in the Armenian market prior to Armavia’s suspension of operations. It is currently the only budget carrier operating in the country.

No other Armenian airline able to take Armavia’s place

There are no other Armenian carriers able to take Armavia’s place at this point in time. While Armenia’s General Department of Civil Aviation has issued 11 Air Operator’s Certificates (AOC) to airlines including Armavia, the majority of these airlines are small charter and cargo operators such as Air Armenia, Vertir Airlines and Veteran Avia. The only Armenian scheduled passenger service operator currently is Atlantis European Airways. Atlantis operates leisure services and currently operates scheduled four times weekly Yerevan-Prague service with its sole A320 aircraft in addition to charter services.

Thus, Armenia will be relying heavily upon foreign carriers to maintain links between the country and the rest of Europe. While Alitalia, Austrian Airlines and CSA Czech Airlines have already responded with some frequency increases, there is still a significant gap left by Armavia’s suspension of operations. The increased frequencies and new routes by Eastern carriers as part of their summer 2013 programmes will also help fill the capacity gaps left by Armavia.