Any airline traffic recovery to be “slow and volatile”: IATA

IATA Director General and CEO, Giovanni Bisignani, stated that aviation industry “remains in intensive care”, upon the release of the latest international air traffic statistics from IATA for Jul-2009. According to the industry body, improved traffic developments have come at the expense of yields, which are expected to continue to fall sharply.

According to Mr Bisignani,  “demand may look better, but the bottom line has not improved. We have seen little change to the unprecedented fall in yields and revenues. The months ahead are marked by many uncertainties, including the price of oil. The road to recovery will be both slow and volatile”.

The one bright spot remains the Middle East, with the region’s carrier being the only region to growing the month, with a 13.2% increase in demand (RPKs), slightly better than the 12.9% growth in Jun-2009. This growth was fueled by increased capacity (+15.3%) and greater market share in traffic between Europe and Asia. 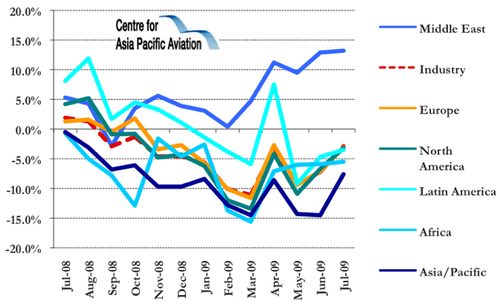 International passenger load factors stood at 80.3%, as capacity was more in line with reduced demand than in previous months. The Jul-2009 load factor is an improvement from Jun-2009’s 75.3% load factor. 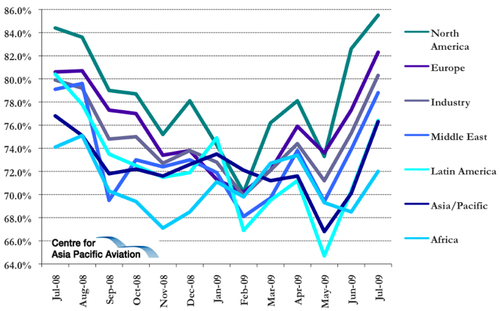 Asia Pacific carriers “experiencing the extremes of this recession”

According to IATA, Asia Pacific carriers are the worst hit by the recession”. The 7.6% reduction in passenger demand in the region in Jul-2009 was the largest decline of any region, but, in a more positive light, the region also had the largest relative improvement from Jun-2009’s 14.5% contraction (and May-2009’s 14.3% reduction).

In further positive news for the struggling region, economic growth returned in a number of Asian economies during 2Q2009, to a much larger extent than elsewhere, while the impact on passenger confidence related to the swine flu was “somewhat diminished” as media attention on the matter dwindles.

This prompted IATA to say that the Jul-2009 improvement in travel demand (with improved declines of 3.1% and 3.2%, compared to year-to-date contractions of 6.9% and 8.0%) was more the result of deep discounting than stronger incomes or greater economic confidence.

Freight remains weak but improving, but things not looking good for yields and revenues

According to IATA, the freight numbers "tell an interesting story". The sector is being boosted as companies re-stock depleted inventories, but once inventories are at desired levels in relation to sales, "improvements in demand will level off until business and consumer confidence returns. Given the large amount of debt in all sectors of the economy, instant relief is not in the forecast”.

Freight demand on international markets was down 11.3% in Jul-2009, for fourteen consecutive months of contract demand. However, this represented a considerable improvement from the 16.5% contraction in Jun-2009 as all regions, except Africa (which experienced its worst performance at -25.9%), experienced improvements in demand compared to Jun-2009. As in passenger traffic, the Middle East was the only region to see freight growth in the month. 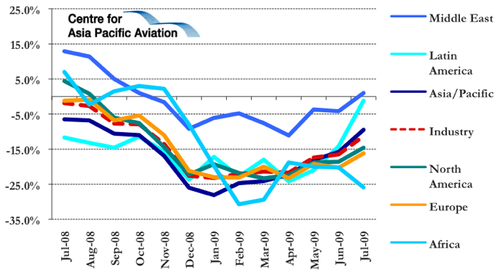 Freight load factors however remained weak, at 47.6%, lower than the 49% recorded in Jul-2009.  IATA also stated that the downward pressure on freight rates and revenues “continued to intensify” in the month.

According to Mr Bisignani, “airlines need to make their money in the June-August peak travel season. Planes are full. Load factors are high. But revenues are way down. Conserving cash, effectively managing capacity and cutting costs will be the long-term theme for every business in the air transport value chain”.