Oil prices have risen over 4% in two days, adding another USD1.35 per barrel overnight in New York to USD72.68 - an eight month high - after trading as high as USD73.23 in intra-day trade. The steep increase in oil is ruffling the few feathers that remain in the global airline industry.

Lufthansa CEO, Wolfgang Mayrhuber, has called for stricter regulation guiding financial market spectators, whom he stated were responsible for the volatile oil price. He added, "the old rule whereby supply and demand dictated the price of a certain raw material no longer applies". 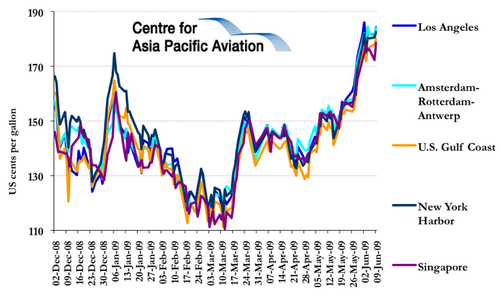 Big drop in fuel costs, but airline losses to widen as revenues dry up

Jet fuel prices are still down around 54-56% year-on-year, and crude prices are down 47.9%. As a result, the industry fuel bill is forecast to decline by USD59 billion to USD106 billion in 2009, according to IATA. Fuel will account for 23% of operating costs with an average price of oil at US$56 per barrel (Brent). By comparison, the 2008 fuel bill was USD165 billion (31% of costs) at an average price of USD99 per barrel. 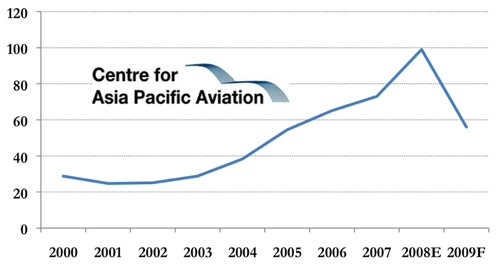 IATA's oil price (Brent) forecast for 2009 has fallen from USD110 per barrel in Sep-2008 (when it predicted an industry loss of USD4.1 billion). The expected oil price average this year has fallen to USD56 per barrel, but airline the airline loss estimate has ballooned to USD9 billion. This is because USD80 billion in total revenue is predicted to disappear from airline pockets this year, due to "falling demand, collapsing yields, broken consumer confidence, and pandemic fears", according to IATA. 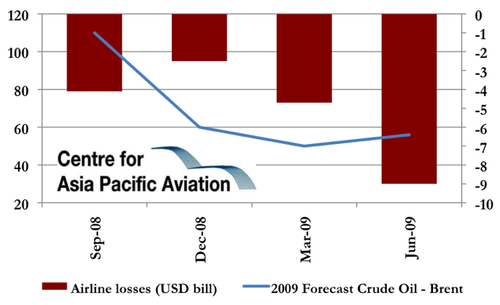 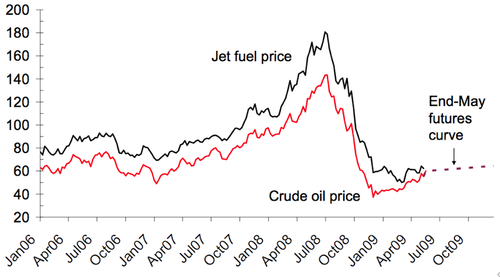 Outlook: What success fuel surcharges as another oil bubble emerges?

The weary airline industry is again forced to confront spiraling fuel costs. But with traffic demand remaining stubbornly weak, they have few levers to pull.

Thai Airways has ventured out to raise its fuel surcharges (effective 12-Jun-09) by USD10-15 per sector, or an increase of around 15%, depending on the route. Whether the increase sticks remains to be seen, as price sensitive consumers may simply take their booking somewhere else.

Overall, the continued rise in the price of oil, in the absence of a real underlying economic recovery, has the potential to significantly threaten the already fragile state of airline finances. Unfortunately for airlines, it appears another oil price bubble is emerging - and this one could have far greater consequences than the last.