Ancillary revenues to total USD23bn in 2010 and set to triple

Ancillary revenue is becoming a hot topic in the airline industry with airlines now reliant on ancillaries after two years of using them to first, overcome high fuel prices, and then slumping revenues and yields. Ancillary revenues are expected to continue to rise as a proportion of total revenue as airlines become increasingly sophisticated about these new revenue streams, with network carriers also embracing the opportunities, meaning ancillary revenues are no longer the domain of the LCC. As AirAsia CEO Tony Fernandes recently commented: “We’ve only just scratched the surface.”

Ancillary revenues to total USD23bn in 2010

While a significant amount, this still represents less than 5% of the operating revenue generated by the airlines in the study, signalling that the move by airlines to monetise services and products previously included as part of the airline costs will continue and airlines will become increasing innovative in their introduction of new revenue sources.

Accordingly, Amadeus Executive VP Commercial Philippe Chereque stated he expects airlines to "grow significantly" their sales of ancillaries which are expected to increase by 300% to EUR74.8 billion in the next few years.

However, the exponential rise in passenger add-ons and the resulting increased complexity could cause problems if not properly managed with Mr Chereque cautioning: “It is vital that airlines consider the end-to-end process of selling, fulfilling and delivering ancillary services. This is difficult even when things are going smoothly. But when a flight is cancelled due to bad weather, an airline has to reaccommodate a plane full of passengers, each with their own combination of assigned seats, in-flight entertainment, additional bags and preferred meals. Successfully translating ancillary revenue into additional profit rests on an airline’s ability to manage such situations efficiently.”

Not just for LCCs

US-based network airlines filled the top three positions in 2009 for total ancillary revenue generation courtesy of robust partner revenue from frequent flyer programmes and a stronger emphasis on baggage fees. The fourth place position was held by Qantas at a 25% revenue premium above the same position held by Ryanair in 2008. The annual revenue required to join the "Top 10 Club" now begins at EUR300 million. 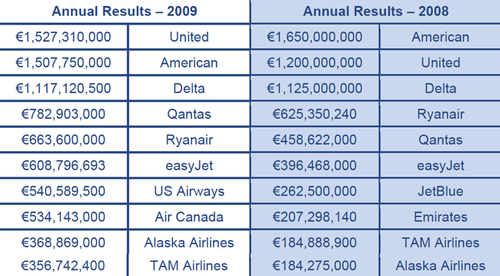 Ancillaries as a portion of total more important for LCCs

Ancillary revenue as a percentage of total revenue still remains dominated by LCCs indicating the heavy reliance they have on this revenue stream. In 2009, Allegiant, Spirit and Ryanair had more than 15% of total revenues derived from revenue sources. 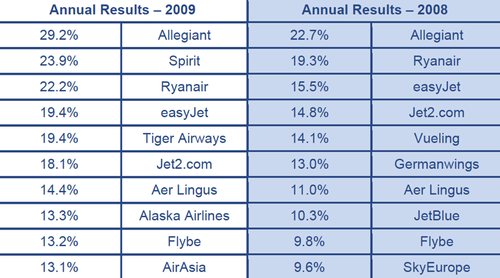 Based on data for the three months ended Jun-2010, Allegiant, Spirit, Ryanair, Tiger Airways, easyJet and AirAsia all reported ancillary revenues representing more than 15% of total revenue, with a figure of more than 20% for Ryanair, Spirit and Allegiant in the quarter. 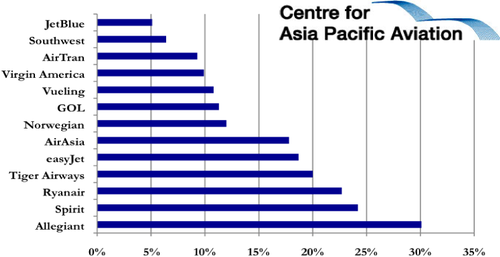 Meanwhile, overall “per passenger” activity for 2009 clearly increased, with Allegiant continuing to achieve strong growth with a nearly 25% increase above 2008 results, with Jet2.com and Qantas both reporting significant increases. A major upset occurred with ancillary revenue champ Ryanair falling off the top 10 list. 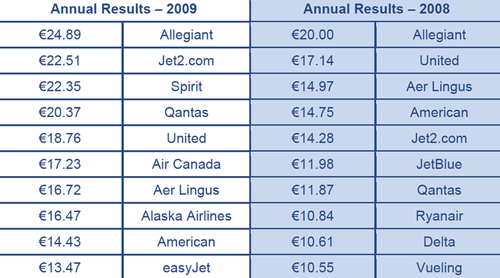 Baggage fees – one of the fastest growing items

Baggage fees are one of the fast growing items in a portfolio developed largely by LCCs that also includes seat allocation, inflight services and products, related travel products (including insurance, car hire and accommodation), inflight advertising, airport lounges access and increasingly diverse opportunities including concert tickets, mobile phone credits and more. Network carriers are now generating strong ancillary revenue through a combination of frequent flyer revenue and baggage fees, with US airlines alone expected to generate around USD4 billion in baggage fees in 2010.

US Department of Transportation's Bureau of Transportation Statistics (BTS) stated US airlines in the three months ended Jun-2010 collected USD893 million in baggage fees and USD594 million from reservation change fees. In addition to the fees, airlines reported ancillary revenue of USD618 million from passengers and from other sources.

Total second quarter 2010 airline revenue from all ancillary sources that can be identified, including fees and frequent flyer sales was USD2.1 billion, with Delta Air Lines reporting the highest figure at USD682 billion. The combined passenger fees and ancillary revenue from other sources constituted 6.0% of the total revenue of the 28 carriers that reported receiving ancillary revenue. According to the US Government Accountability Office (GAO) ancillary fees contributed at least USD3 billion in revenue for major US airlines in 2009.

Spirit Airlines reported the largest percentage of operating revenue from ancillary revenue of any carrier, at 24.2%.

Source: Bureau of Transportation Statistics, Form 41; Schedule P1.2.
* Ancillary revenue includes baggage fees, reservation change fees and miscellaneous operating revenue, including pet transportation, sale of frequent flyer award miles to airline business partners and standby passenger fees. Revenue from seating assignments and on-board sales of food, drink, pillows, blankets, entertainment, or any other ancillary items are reported as Transport Related Revenue and cannot be identified separately.
** Delta Air Lines, after completing its merger with Northwest Airlines, reported combined numbers for the first time in the first quarter of 2010.
*** 28 carriers reported baggage fee, reservation change fee or miscellaneous operating revenue in 2Q 2010
Such charges, particularly in the US as network carriers adopt these strategies, have quickly become a flashpoint for airline differentiation and a catalyst for marketing innovation. Southwest Airlines for example has continually stressed its no-baggage fee policy as a point of differential through a series of advertisements.

The ancillary movement is spreading to European network carriers, with British Airways, under considerable financial strain, one of the earlier movers after its US counterparts.

Asia Pacific adoption of ancillary revenue strategies, outside the LCC sector, has been much more cautious, although airlines across the region are now stepping up their efforts to capture new revenue growth, picking up on some of the “other revenues” opportunities from charging change fees more often, service charges for frequent flyer tickets, seat selection, lounge passes and more.

There is clearly more innovation to come in the world of ancillary revenue generation, with recent moves by GDS companies, such as Sabre, Amadeus and Travelocity, highlighting the increasing prevalence of ancillary products across the airline system.