ANA to 'grab back' pax from Asian rivals; Cathay yields improve but below 2008

He added that the opening of an international terminal at Haneda next week will enable ANA to offer easier connections between international and domestic services, adding that the new terminal is “something we’ve been eagerly awaiting”. ANA plans to boost overseas services by 15% in the 12 months to Mar-2011 adding that its antitrust immunity with United and Continental would boost the carrier's network "significantly". Mr Ito added that the carrier would codeshare on some Haneda services with Malaysia Airlines and EVA Airways to help boost traffic.

The carrier may also add services from Tokyo Haneda to London, Frankfurt and Amsterdam once it takes delivery of its 55 on-order B787s, with Mr Ito stating: “We want the 787s to be our main plane for Europe."

Also in North Asia and shares in Cathay Pacific declined 1.3% yesterday. On the same day, the carrier, in its Sep-2010 traffic release, stated the “premium volumes and quality grew strongly against 2009” but still lags 2008 levels.  The carrier continued: “This gap will begin to close in the months ahead as the negative impact of the financial crisis on premium demand began to bite hard from late September 2008."

The carrier handled a 2.2 million passengers in Sep-2010, an 18% year-on-year increase with an average passenger load factor of 81.8% (+1.6 ppts, with “high” load factors seen across the system). Cargo volumes increased 10% to 146,152 tonnes. The carrier stated its passenger traffic remains “robust” as it moves from the summer holiday season into “what is traditionally the period when premium demand picks up”. 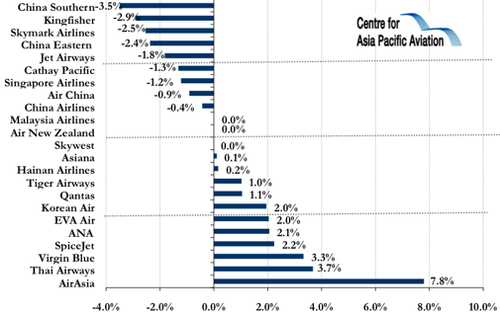