Shares in ANA slipped 1.0% on Friday, as the carrier reported a narrowed net loss and an operating profit in the three months ended Jun-2010, as it benefited from an uptick in international business and tourism travel.

The carrier added that it expects its cost reduction efforts and the opening of a new runway at Tokyo Haneda to benefit the carrier, commenting: “ANA will continue to expand its international business. We will also ensure that its planned income recovery and cost reduction plan is implemented, and build a strong cost structure capable of withstanding fluctuation risks”.

However, the carrier warned: “While the Japanese economy showed steady recovery during the three month period under review, deflationary effects continued to exert downward pressure, and taking an optimistic view remains difficult. Concerns about a downward economic swing, primarily in Europe, along with moves by our competitors, mean that business conditions going forward will remain uncertain”.

In other ANA news, the carrier reportedly plans to select partners to establish a new LCC as early as next month. ANA may take a stake of between 30% and 50% in the new company, with overseas airlines and investment funds owning slightly less than 30%, according to reports. The airline will be established as early as 2011.

The carriers stated the new airline will operate the same low fare, low cost model as the other airlines in the Tiger Airways Group, and is expected to commence operations in 1Q2011, pending regulatory approvals. Thai Tiger will operate a consistent A320 aircraft fleet in line with other airlines in the Tiger Airways Group. Based in Bangkok, Thai Tiger will operate international and domestic flights out of Bangkok Suvarnabhumi International Airport offering short-haul, point-to-point services within a five hour flying radius. The route network and further information on the corporate structure will be announced in due course.

Shares in Thai Airways gained 0.7% on Friday, while Tiger Airways’ shares gained 2.5%, ahead of the LCC announcement today.  In early morning trading, shares in the carriers have gained 2.2% and 1.5%, respectively, with Tiger Airways’ shares rising as much as 2% to SGD2.09, the highest since its January debut. 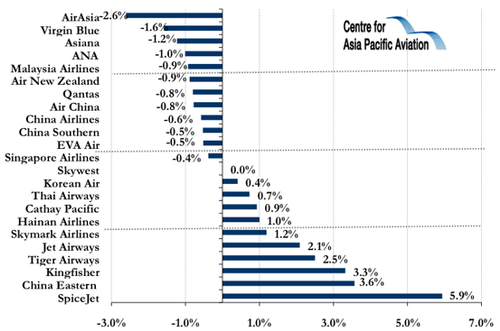