ANA and Korean Air in the black; JAL and Asiana negative

It is interesting to compare the respective results of the four major non-Chinese airlines in north Asia. The Korean carriers have a different financial year – ending on 31-Dec-2009 – from the Japanese, whose FY ends on 31-Mar-2010. So the four-carrier comparisons are only on the most recent quarter.

A separate analysis deals more in depth with JAL’s Sep-2009 quarterly and half yearly results, but this comparison makes clear just how far out of step JAL has become with its nearby competitors.

For the three months to 30-Sep-2009, both ANA and Korean delivered better than last year results. JAL’s decline is a standout by way of contrast. That ANA in particular was profitable in the September quarter is a notable achievement. 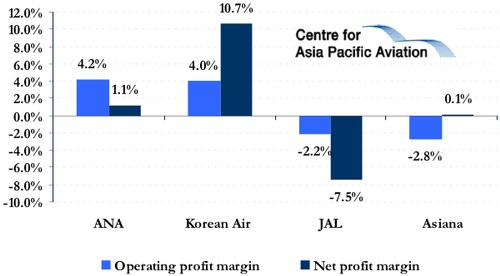 Korean performing better than Asiana; and cost is the key

The statistics for Asiana and Korean are similar but for one feature: the 14.7% reduction in cost that Korean achieved. This compared with a 8.5% fall in Asiana’s expenditures and goes a long way to explaining the difference in financial performance.

JAL and ANA: revenues down but worlds apart on the bottom line

ANA’s results by most measures would be unattractive, but as noted above the carrier is clearly improving quickly in the most recent quarter, making a JPY14.1 billion operating profit in the quarter, for a JPY3.8 billion net result.

For the six month period however, the big difference is JAL’s 28.8% revenue drop (partly related to its cost reduction, as services were reduced and fuel prices fell), against ANA’s 18.8%.