AMR, Delta and US Airways slip before announcing completion of share issues

US Airways (-0.4%) announced on Monday that it closed its previously announced common stock offering. US Airways also announced that Citi, the underwriter of the offering, had exercised its over-allotment option to purchase an additional 2.7 million shares. As a result, US Airways:

US Airways intends to use the proceeds from the offering for general corporate purposes.

Delta Air Lines (-0.6%) also announced during the day that announced it has closed USD2.1 billion of financing transactions, marking a "significant step" toward addressing the company's 2010 debt maturities and further strengthening its liquidity position. The USD2.1 billion transaction will generate USD600 million in incremental liquidity after refinancing USD1.5 billion from Northwest's bank credit and revolving credit facilities. Delta now expects its unrestricted liquidity at 30-Sep-09 to be USD5.6 billion. The total transaction has an effective yield of 9.2%.

Delta President, Ed Bastian stated, "the competitive terms and strong demand for this financing reflect the market's confidence in Delta and our financial strength. With these transactions, we've addressed more than 40% of our 2010 maturities and generated an incremental USD600 million to bolster our best-in-class liquidity position."

American Airlines (-0.3%) meanwhile stated it has completed the issuance and sale of 48.5 million shares, worth USD400 million, and the sale of USD460 million in convertible senior notes, also on Monday. The underwriters of the stock are yet to decide whether to exercise their option for a further 7.3 million shares, which would generate an additional USD60 million.

FedEx (+3.4%) was up on the back of statements by Chairman and CEO, Frederick W Smith, that the global economy has started a “slow but certain” recovery. Mr Smith stated that although recovery in demand is not occurring in “a straight line up”, FedEx believes it has “hit bottom, and traffic is climbing up from a multi-year low." 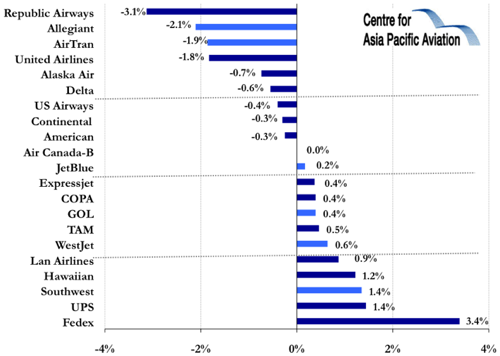