Airport International Group (AIG), the operator of Queen Alia International Airport (QAIA) in Jordan, announced at the beginning of Sep-08 that it has commenced improvements to the existing terminal at the airport. The upgrade to the terminal will include refurbishment of lighting, air conditioning, toilets, security, and the duty free area.

The upgrade is a temporary move to deal with increasing passenger traffic at the airport, which is operating over its design capacity after passenger numbers rose 17% year-on-year in 2007. A more permanent solution is the construction of a new terminal, which is expected to open in Aug-11, and will increase airport capacity by three million passengers p/a.

Amman Airport was constructed in 1993 and dominates Jordan's air transport sector, handling 97% of the country's international air traffic. Airport traffic is also highly attuned to Royal Jordanian's operations, as it is the major customer at the airport. 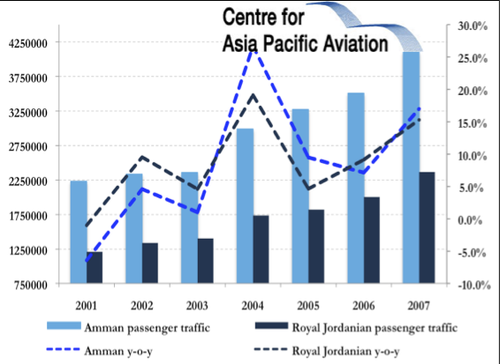 The USD700 million refurbishment and expansion of the airport commenced in Nov-07, with the awarding of a Build Operate Transfer contract to the AIG consortium. AIG (not to be confused with the American International Group) is composed of Aéroports de Paris Management (ADPM), Joannou & Paraskevaides, J&P-Avax, Abu Dhabi Investment Company, Noor Financial Investment Company and Edgo Group.

The 25-year agreement with the ADPM-led consortium to rehabilitate and expand the airport covers two phases. The first phase will see the airport increase capacity from the current 3.5 million to 9 million passengers p/a by the end of 2010, with refurbishment of the existing terminal and other facilities. The new terminal will increase passenger capacity to more than 12 million p/a.

The airport upgrade will be financed through USD370 million of debt, with the remainder from shareholders and funds generated during the three-year construction period. Abu Dhabi Investment Company announced in mid-2008 that it had concluded financing, comprised of a combination of senior and subordinated debt using conventional and Islamic facilities and has been used provided by International Finance Corporation, the Islamic Development Bank and three commercial banks.

The consortium will retain all aeronautical and commercial revenues generated at the airport, but will pay the Jordanian Government an annual concession fee of approximately 54% of total revenue.

The Jordanian Government hopes the upgrades to the airport will see the development of Amman as a key hub in the Gulf region, with national carrier, Royal Jordanian, having a strong pan-Arabian and intercontinental network. 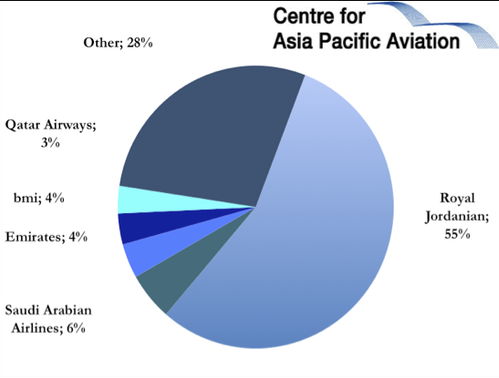 In mid-2008, the government committed to a USD100 million, 30-month project to expand the road infrastructure around the airport, to cover the expected increase in passenger traffic that the nearby road network will be required to handle. Tenders were announced in Jun-08.

Royal Jordanian has been eager to see the airport facilities improvez, and opened its 18,000 sqm Crown Class lounge at the airport at the end of Aug-08. The facility has capacity for 340 passengers simultaneously and will be available to the carrier's ‘Crown Class' passengers, as well as Platinum, Gold and Silver card holders of its frequent flyer programme, and oneworld's Emerald and Sapphire card holders.