The AMEX Airline Index ended trading up 1.1% on Monday (05-Oct-09), assisted by Sep-2009 traffic results that suggest demand may finally have bottomed out.

Analysts were more positive about United Airlines (+1.3%), following an announcement it has priced its underwritten registered public offerings of common stock and convertible senior notes. The carrier stated it has agreed to sell 19 million shares of its common stock at a public offering price of USD7.24 per share. The company has also granted the underwriters an over-allotment option with respect to an additional 2.85 million shares of its common stock on the same terms and conditions to cover over-allotments, if any.

As a result, analysts at Stifel Nicolaus increased its rating for United from “Hold” to “Buy”, also setting an USD11 price target. The analysts believe the carrier will earn between USD300 million and USD350 million and improve its liquidity as a result of the offering.

Fitch Ratings has meanwhile assigned a rating of “C/RR6” to the carrier’s convertible note issue. The Issuer Default Rating (IDR) for both UAL and United is “CCC”. 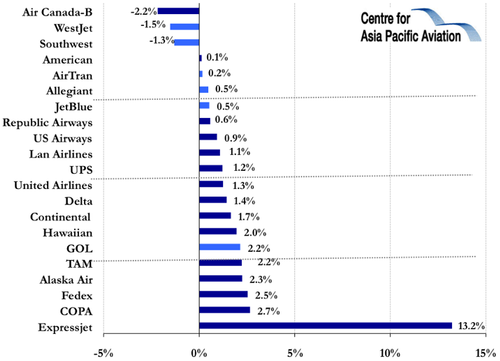