Investors instead focused on the success airlines are having in raising yet more funds to help finance their losses. Analysts at Barclays Capital stated that US carriers have indicated revenue is “improving significantly” in 3Q2009, with sales still having room to grow. Credit markets are also becoming more open to airlines, which the analysts stated has provided “much needed cushioning”.

Meanwhile, the Air Transport Association of America (ATA) announced passenger revenue for selected airlines fell 21% year-on-year in Aug-2009, the tenth consecutive monthly decline. According to ATA, passenger numbers on US airlines fell 6% in Aug-2009 while the average cost per ASM fell 17%. ATA also reported a 13% decline in cargo traffic (FTKs), the 12th consecutive month of declines.

ATA President and CEO, James May stated, “the industry continues to see a reduction in the number of air travellers, despite double-digit declines in fares. While there are signs that improvement may be on the horizon, regrettably the demand for air travel remains weak.”

American Airlines (+4.4%) announced during trading that it intends to make concurrent offerings, subject to market and other conditions, of 30 million shares of its common stock and USD250 million principal amount of its convertible senior notes due 2014. AMR intends to use the net proceeds from the offerings for general corporate purposes.

In terms of operating expenses, Hawaiian anticipates CASM, excluding fuel, to increase by approximately 0.5% to 3.0% compared to 2Q2009, and to increase 14.5% to 17.0% year-on-year. The carrier stated it has revised its previous expense forecast made in 2Q2009, to reflect a greater than previously anticipated increase in maintenance expenses. According to Hawaiian, these forecasts are in line with its previous forecasts made in its 2Q2009 earnings call on 27-Jul-09. 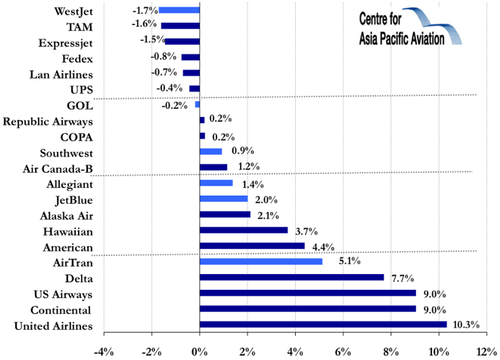