Last week’s AMR earnings call had analysts divided on the prospects for an American Airlines bankruptcy, despite a management statement that it had no intention of going down that route. Even so, this headline in the wake of the call was typical: “American appears headed for a crash landing”.

The problem? Its emphasis on achieving competitive labour costs prompted more than one analyst to read between the lines, suggesting if labour doesn’t change its stance and give way on wages and work rule issues that put American at a USD800 million competitive disadvantage, the company will have no choice but to file. But others point to help needed from creditors and a need for more cash.

Estimates suggest that labour deals with pilots, flight attendants and ground personnel could save between USD300-400 million annually, which wouldn’t put much of a dent in this year’s expected USD1.2 billion loss. Sources indicate the company wanted USD660 million in annual pay through work rule and wage changes from pilots, quite different than the 30.5% wage and bonus increases the union wanted followed by annual raises of 5% at one time.

Morningstar analyst Basil Alukos, one of the commentators citing lender relief, said due to the company’s bloated costs, the likely prediction is cash will drop to USD1.2 billion by the end of 2012. Still others agree but noting debt loads over the next two years are the most critical with USD2.5 million in 2011, with another USD1.8 billion in 2012 topped by USD1 billion in 2013 to say nothing of USD560 million in pension obligations.

The only thing it has in its war chest is USD800 million of aircraft that become unencumbered next year. Although even that would probably not yield “100 cents on the dollar”, according to Mr Alukos who also pointed to the revelation during the call of a USD250 million cash decline on frequent flyer mileage redemption.

Other analysts, however, reiterated their assessments as the stock swung widely earlier this month: there is no immediate risk of insolvency and, unless debt markets contract sharply, American will be able to borrow.

Bankruptcy would strengthen the airline and industry

American is in an odd position now. There are those who say it will not need to file and management who has rejected it in the past. There are others who blatantly wish it would put itself out of its misery and file. One analyst, however, has put pen to paper to paint a post-bankruptcy picture.

Should AMR actually file for Chapter 11 bankruptcy, the best case scenario is too long a shot, according to AirlineForecast managing partner, Vaughn Cordle, who stated the best thing would be a cross-border merger with one of its alliance partners, although he recognised current law prohibits this very option. Along with many in the industry, Mr Cordle advocates for the abolition of the foreign ownership rule in favour of treating the airline industry much like other industries.

Failing a cross-border solution, a merger with US Airways would benefit both, as well as the rest of the industry, he concluded.

Thankfully, with the experience of the last decade in which all but American and Alaska Airlines among the legacies filed for bankruptcy, some more than once, bankruptcy is not what it used to be. The “B” word used to mean travel agents were so afraid of hanging up clients they would actively book away from the carrier in question, which is exactly what happened with TWA, Braniff and Pan Am while Eastern’s mechanics created such a worry over safety, it had the same impact.

Now, they’ve had the experience of United, Delta and Northwest bankruptcies, they know that there is life after bankruptcy. It also may be that with the shift from travel agents to online travel agents and, more recently, to airline.com, the power of the travel agent industry has declined.

Bankruptcy for American would be a sad event given its pride in avoiding it, when others did not, and for labour, which cut such a landmark deal as to save the carrier. Even so, with the increasing pressure from Wall Street as well as no clear path to getting to competitive costs, especially labour costs, the carrier may have little choice.

“The question is whether or not the company can avoid bankruptcy this time around,” said Mr Cordle. “It's all about liquidity and fixed charge coverage ratios. Credit default swaps put the probability at 50% within the next 12 months, 65% or so within three and 88% within 4-5 if memory serves.”

He admitted to betting that bankruptcy will occur by the end of 2012 but added that may be a little conservative. “It's a toss up on timing,” he concluded. “They are running out of assets to sell but can re-mortgage certain assets as the debt matures and is paid off.”

Most analysts agree that American has plenty of liquidity for now.

“The company is on track to lose USD1.2-1.4 billion in 2011 and USD1-1.3 billion in 2012,” said Mr Cordle after the earnings call. “If our base-case assumptions of GDP growth, fuel, and revenue are in the ballpark, the company's liquidity will fall to a level that could force the company to seek the protection of a Chapter 11 filing sometime in 2012.”

It is well known that American does not have the revenue power of its Delta and United Continental counterparts, with its network power also wanting.

Mr Cordle also pointed to free cash flow, saying it would be cumulatively negative by USD2-2.5 billion in 2011, predicting the cash balance will fall to about USD2.5 billion by the end of 2012. He also noted the looming USD13 billion pension obligation, including a USD5.5 million shortfall to the USD7.7 billion pension assets, and USD3 billion health-care tabs coming due. Even so, he rejected suggestions to reduce capital expenditures by parking aircraft to stem the red ink.

“With the updated pension plan accounting, the company will be required to increase plan cash contributions, which will result in lower earnings and a greater negative net worth in 2012,” wrote Mr Cordle. “AMR’s pension plan assets and obligations would be taken over by the PBGC if the company files bankruptcy. In terms of magnitude, it’s the pension and health-care liabilities and costs that get to the heart of AMR’s inability to earn its capital cost, invest in competitive resources, restore lost wages and grow the airline.”

Mr Cordle also noted that while cost disadvantages across the board plague the company, it is the labour costs that matter the most. 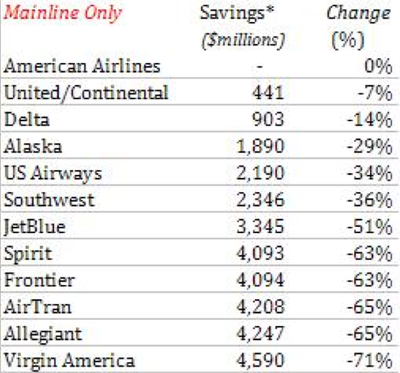 “If the company eventually files bankruptcy, which is likely in my estimation, one thing to look for is how much ownership of the new company the management and pilots secure,” said Mr Cordle in his analysis. “Management and pilots can make a lot of money post-bankruptcy if both parties get a certain percentage of the new company. The downside is that pilots and other employees will lose their defined benefit plans, as the PBGC will force an involuntary termination.”

He then recounted the benefits of bankruptcy for management if they secure a percentage of ownership in the post-bankruptcy company. “If my estimates are correct, this value is likely in the USD200-400 million range and even more if a merger with US Airways can be consummated,” he said. “The pilots could secure a similar amount if they are smart. A merger would increase industry pricing power and provide cost and revenue synergies for the combined company.”

In a post-bankruptcy world

Yesterday, Mr Cordle published an update concluding should American and US Airways merge it would not only equal a viable business but a stronger industry. Mr Cordle readily admitted he received an onslaught of emails and calls after his first post, which concluded American was already technically bankrupt given its negative USD26 per share book value, prompting him to think about a post-bankruptcy scenario.

The bankruptcy suggestion is being used as leverage in labour negotiations, with Mr Cordle adding that its credit worthiness and the ability to secure new aircraft (something it has already done with the sweet-heart deal cut with both Boeing and Airbus for USD13 billion in financing) would improve.

As a stand-alone company it would still be one of the weakest competitors and would have the added burden of unhappy employees serving an inadequate route structure.

Current market concentration, he said, has increased to 40% including Southwest and AirTran. “That’s still too low, in my estimation, to allow the industry to earn its cost of capital over the full business cycle,” said Mr Cordle. “More consolidation and mergers are needed.”

He called a bankruptcy and subsequent merger with US Airways, a win-win-win scenario for the two airlines, labour, as well as the industry and its capital providers. However, he rejected American management retaining control of the merged company, saying Wall Street believes US Airways chair Doug Parker would be the best candidate.

“He is a realist who has nothing invested in maintaining American's self-image, once correct but no longer so with the industry's competitive evolution, that it is the leading airline in the industry,” he concluded. “Doug would manage American for an optimal outcome for all stakeholders, not attempt to achieve a standing that is no longer achievable.... Parker could make the combination soar, but only after AMR goes through the car wash of a bankruptcy.”

The hurdles to such a union are immense including the fact that US Airways pilots have yet to reach a seniority deal, six years after its merger with America West.

“I'm simply making the case from a strategic-fit perspective,” he said. “The merger scenario makes the most sense...and it improves the industry’s ability to absorb the massive new costs that are likely to be imposed upon it by government.”