American, US Airways up on load factor results; Air Canada down despite record traffic

Continental was up, despite FTN Equity Capital Markets forecasting the carrier’s RASM to decline by 22% in Sep-2009, while Oct-2009 is also expected to be a tough month for the carrier. Continental estimated RASM fell 17-18% in Aug-2009. Furthermore, Continental’s unsecured debt was downgraded by Standard & Poor's from 'B-' to 'CC+', due to the declining value of its aircraft amid the global financial downturn, which the company believes could reduce asset protection for unsecured creditors, if it were to file for bankruptcy.

In LCC news, Allegiant (-0.2%) slipped, despite reporting a continuation of its aggressive growth strategy in its Aug-2009 traffic results.

Fellow Canadian carrier, Air Canada (-0.6%) also reported its Aug-2009 traffic on the day. The carrier reported a record load factor of 86.8%, up 2.4 ppts - its second consecutive monthly record. The carrier attributed the result to its careful capacity management, which fell 3.6% for the month, adding its “initiatives over recent months to re-engage customers and travel agents are clearly starting to pay off.” Traffic fell 0.9%. Air Canada plans to continue strategically redeploying capacity to improve its revenue generation. 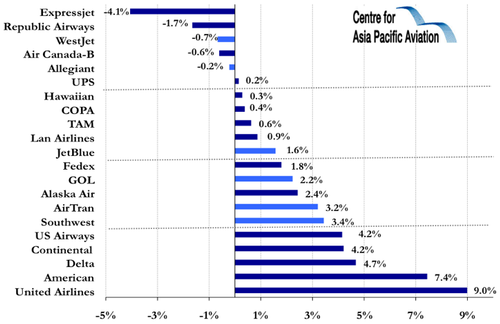