American Airlines’ cornerstone strategy, focusing on Miami, New York, Chicago, Dallas and Los Angeles, is expected to reap incremental revenues and cost saving of USD500 million annually, according to a filing the company made yesterday with the Securities and Exchange Commission.

American said its joint ventures with British Airways/Iberia and Japan Airlines, now awaiting approval from the Department of Transportation, will also contribute to the expected savings and revenue goal.

The company expects it will be realising the majority of these incremental revenues and cost savings in 2011, and the remainder by year-end 2012. However, it said that much depends on issues beyond the company’s control, such as approval of its joint ventures. American expects approval for the BA deal by the end of June with European authorities following suit later in the summer.

American is also banking other airlines, as they work through the 20-odd labour agreements that remain open in the industry, will achieve parity with American’s higher labour costs. It estimated that, at the beginning of 2010, its labour cost disadvantage amounted to approximately USD600 million per year.

Loss-making Air Canada’s B-shares slumped 10.4% yesterday, while the profitable Jazz Air Income Fund (which operates Air Canada Jazz), gained 0.5% as it announced its May-2010 cash distribution of CAD0.05 per Fund unit would be paid on 15-Jun-2010.

According to its media material, Jazz is the second largest airline in Canada based on fleet size and the only airline serving all 10 provinces and three territories. Jazz forms an "integral part of Air Canada's domestic and trans-border market presence and strategy".

Jazz has a commercial agreement with Air Canada that is the core of its business. Under the Capacity Purchase Agreement (CPA), Air Canada purchases substantially all of Jazz's fleet capacity based on predetermined rates. According to Jazz, “the CPA significantly reduces Jazz's financial and business risks, and provides a stable foundation for day-to-day operations and future growth”.

In other words, Jazz carries little risk, while Air Canada remains largely exposed to the market vagaries. Consequently, investors clearly favour Jazz’s more stable profile. Its shares have been largely flat over the past month, whereas Air Canada has dropped 30% (along with many other airlines). 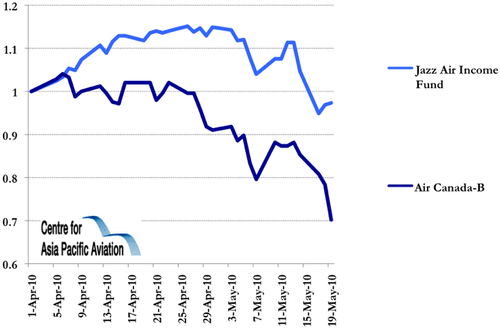 US Airways gains on Mesa loss

Elsewhere, US Airways gained 5.7% yesterday. The carrier’s influence is growing over Mesa Air Group, which received another blow when a US District Court ruled against it in its dispute with Delta Air Lines. The ruling paves the way for the elimination of Freedom Airlines as a Delta Connection, effectively grounding 22 regional jets. 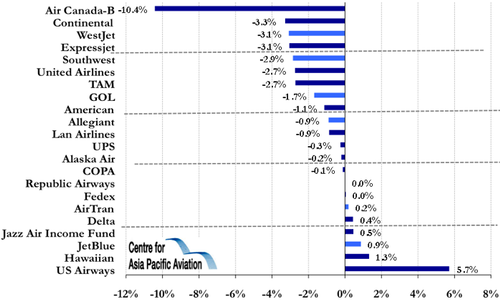