Given the fact that American Eagle was actually profitable to the tune of USD40 million in 2010, it is clear American has been working hard over the last few years to do what it could not do for itself: achieve Eagle profitability as it positioned its regional operations for spinoff. Yesterday, on 11-Aug-2011, it filed Form 10, required of all companies wishing to become a publicly-traded entity, with the Securities and Exchange commission in the latest milestone in an effort that dates back to 2008.

The spinoff calls for American to capitalise Eagle with approximately USD50 million after divestiture and, as expected, will keep the regional’s debt and all its jet aircraft. Eagle gets USD135 million in receivables, its ground-handling subsidiary and the turboprops. Saying restructuring its debt and equity will stabilize the regional operation, Eagle also gets approximately USD800 million of AMR's net operating losses with it to offset future net income.

American also has the right to re-bid 12 of the 36 turbo-prop routes beginning in 2012 and 40 beginning in 2014. It can also re-bid the contracts for Eagle’s ground handling operations it does for American.

Despite the fact it has wanted to spin off Eagle for three years, it said in its release that it could decide to retain Eagle, or the divestiture of Eagle could take another form, such as a sale. Citi and Evercore Partners are acting as financial advisors to AMR Corporation. Eagle provides 93% of the regional flight operations and 85% of the ground handling services for American’s regional flights.

Republic Airways Holdings CEO Bryan Bedford revealed during his second-quarter earnings call that he has been in discussions with American and it remains to be seen whether, now that the details are out, a sale to any of the holding companies could come to pass. It is highly doubtful as Pinnacle, SkyWest, Trans States and Republic are struggling with acquisitions of other regional companies and because any new owner would face massive fleet, and probably other, investments.

American Eagle, which would be the nation’s third largest regional after spinoff, posted revenues of USD1.2B, up 7.2% in first half while expenses, according to American’s 2Q2011 report reached USD1.5 billion up from USD1.3 billion in 2Q2010.

Indeed, a five-year look back shows Eagle has been consistently profitable, with profitability ranging from as high as USD67 million to as low as 20.8 million. 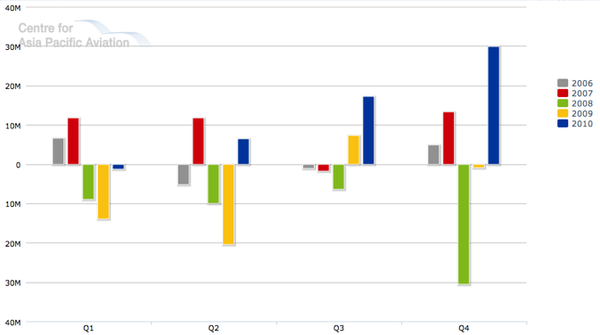 The five-year review also shows the airline maintained fairly consistent capacity ranging between 12.2 billion in 2006 to 10.7 billion ASMs in 2009. In 2010 it rose to 11.7 billion as most other metrics tracked that experience.

In 2010, express programme financial reports -- revenues and expenses which admittedly can be a deceptive way of looking at things -- revealed the usual: everyone except American Eagle is profitable.

Even so, Form 41 data, gathered from CAPA’s website profile page for American Eagle, shows a different story, one in which American has worked to improve Eagle’s prospects over the past three years. For instance long-term debt has dropped substantially from more than USD3.5 billion in 4Q2006 to less than USD2 billion in 4Q2010. 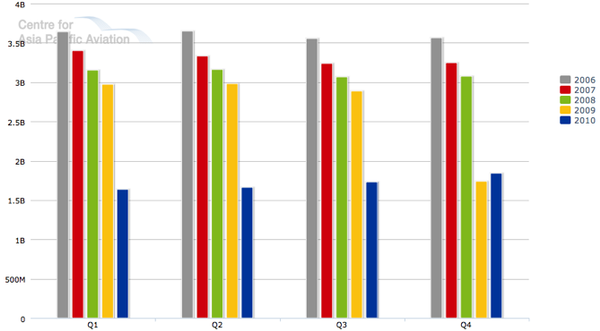 However, total assets have also dropped from more than USD4 billion in the fourth quarter of 2006 to nearly USD3 billion in 4Q2010. 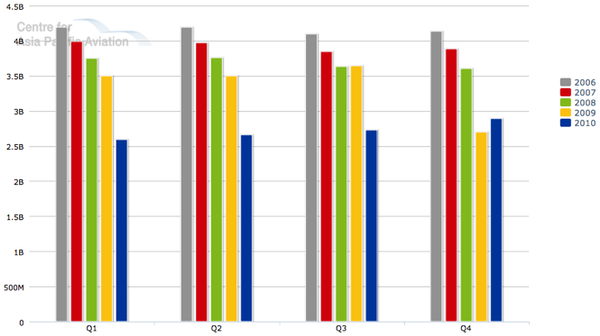 Meanwhile, again according to Form 41 data, it looks as if assets just about equal total liability and stockholder’s equity. 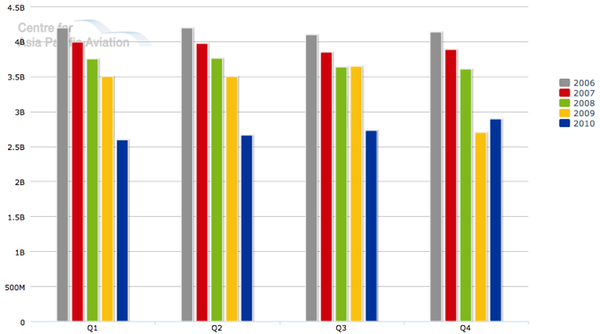 Over the last several years, Eagle has launched several initiatives to lower operating costs including increasing the efficiency of maintenance programmes through the use of new software systems and outsourcing the process of selecting and scheduling crew hotels. It is continuing to work with employees to develop other initiatives to improve productivity and lower costs. And now American’s spinoff will result in even lower costs with American’s assumption of Eagle’s aircraft debt.

But those metrics are becoming increasingly opaque judging from the second quarter regional airline comparisons.

The nine-year contract between AMR and Eagle outlined yesterday includes 281 aircraft but calls for American to be able to rebid up to 12 of its 36 turbo-prop aircraft beginning in 2012 and up to 40 jet aircraft beginning in 2014. Eagle only operates 47 large RJs now. However, the re-bid jets would likely include the 198 ERJ 135/140/145 jets now in operation. The agreement would also include a provision to re-set rates to reflect any change in market levels for regional feed after four years. That escalator clause is important since some other programs have not included such assurances.

Even so, Eagle will have to compete with other public and private regional holding companies in order to retain those routes, not surprising given union expectations earlier this year. And it looks as if it will be responsible for bringing its fleet up to par -- larger aircraft -- with industry standards.

The company cited the 14 aircraft contracts, covering 276 aircraft, set to expire between now and 2016, something the rest of the industry is eyeing as well. It also noted that between 2000 and 2009, the heyday for transferring business to regionals, regionals increased their share of domestic capacity from 4% to 13%. Forecasts show that regional capacity will grow at 4% per year through 2030 compared with the 2.7% per year expected for mainline carriers.

In an echo of AMR’s own problems, the filing said Eagle labor costs were higher than competitors owing to more senior crews although that is expected to change. Mainline carriers have already started hiring from regional ranks, creating problems for their regional counterparts. The shift for Eagle, however, is expected to lower Eagle labor costs. This will be further helped by the ability of Eagle pilots to transfer to American.

Eagle President Dan Garton, acknowledging the challenging regional airline environment, moved yesterday to reassure employees, saying not much will change with the divestiture as he outlined the points in the Form 10 filing.

"This industry is intensely competitive and it will not be easy to transform Eagle from a wholly-owned subsidiary into an independent company overnight,” he wrote in a letter to employees yesterday. “I’m sure we will have growing pains along the way – but I am equally confident that we are up to the challenge."

Aircraft and asset transfers leave American Eagle with 47 CRJs only

American is transferring the jet aircraft, along with their indebtedness, to its certificate after divestiture because it wants control of the aircraft since it is responsible for the debt. That means there are only 47 CRJ 700s in Eagle operation, at a time when other regionals are migrating to larger aircraft and have many more with which to sweeten future bids.

Other regional airlines are re-fleeting

Other regional companies are in various stages of re-fleeting. Pinnacle’s jet fleet, once the Mesaba integration is completed, looks to be the closest to Eagle in terms of fleet. It will have 57 CRJ 900s and 169 CRJ 200s with its larger RJs numbering only 10 more than Eagle. 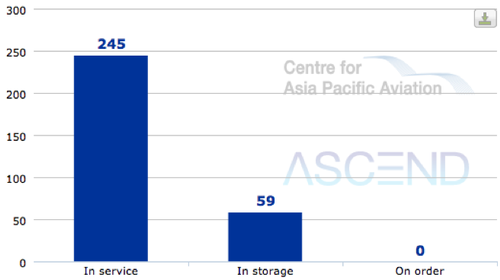 Subsidiary Executive Airlines has 36 ATR 72 which will not transferred to American with the jets. While the ATR 72 is a more economical solution to regional jets their average age is in the mid-teens, although 12 are the ATR 72-500. The ATRs were part of a sale leaseback transaction and will be returned to the lessor following withdrawal. 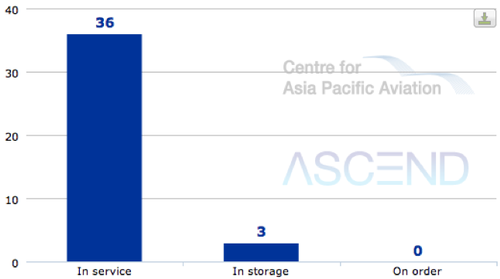 Eagle will retain USD135 million in payables as of 30-Jun-2011 but will be released from other payables, workers compensation liabilities and accrued interest totaling about USD50 million at the end of the second quarter.

Clearly, the idea is for American to diversify its regional feed over time. The benefit for Eagle is that it too could diversify its clientele at the same time. But that is really simply AA-speak for following the rest of the industry in trying to lower regional airline costs.

American also cited the fact that each company will be able to allocate resources and capital consistent with their strategic priorities which means Eagle will likely be responsible for re-fleeting.

In the spin-off, AMR Corporation would distribute to its stockholders 100% of the outstanding shares of Eagle on a pro-rata basis. Following the distribution, Eagle would be an independent, publicly-traded company, and AMR would not retain any ownership interest in Eagle.

The business includes its substantial ground-handling service which brought in USD250 million or 20% of Eagle revenues from serving American and other airlines at more than 100 airports in the US, the Bahamas, the Caribbean and Canada. Under an eight-year ground handling agreement, Eagle would provide ground handling services to American at 106 airport locations. However, this business, too, could be rebid at a specified number of airports each year.

The two companies must gain Securities and Exchange Commission (SEC) and other regulatory approvals. It is also filing with the Internal Revenue Service on the tax-free status of the spin-off to AMR shareholders and finally, the completion of inter-company agreements and the approval AMR’s board which has already given the spin-off plans the go-ahead. The company said the tax-free distribution of Eagle shares is the most efficient way to separate the two companies while “benefiting both AMR And Eagle.