Of all listed American carriers, only Republic (-1.0%) lost ground, as airlines had a positive day. 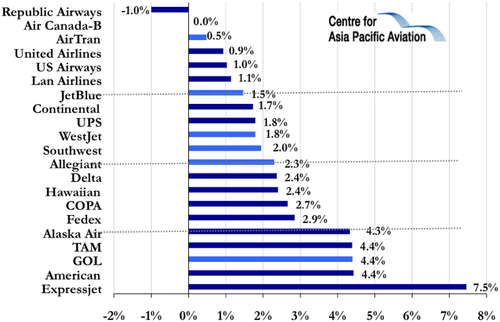 American Airlines had a good gain as the Dow rose 203 points (2.1%), narrowly taking the index above 10,000 again, on better economic news.  Alaska Airlines too (+4.4%) basked in this week’s report of higher traffic levels and load factor improvement, against a capacity decreases.

After a 21.2% fall the previous day, Expressjet stocks recovered some ground, up 7.5%.

Latin American carriers, GOL and TAM (each +4.4%) both continued their ascent and COPA also rose another 2.7%.

Withdrawing 8.3% of system capacity y-o-y, the carrier reported pax traffic down 6.5% for the month of October; this produced a load factor increase of 1.6ppts, to 84.2%.

The largest capacity cutbacks were on international routes, with a 13.6% overall reduction, against a 9.7% fall in RPMs: ASMs were down most significantly in Atlantic and Pacific markets, following ramp-ups last year:

With the substantial capacity cutbacks, load factors were again strong; the only route group to experience a lower level was the Pacific, where the 16.1% fall in RPMs outweighed the capacity reductions.

Cargo system ton miles for the month were meanwhile down 4.7%, with freight down 4.3% and mail continuing its slide, down 15.3%.

This showed some improvement however on the annual figures, where the year to date system ton miles were down 25.7%.

Delta is a keen bidder for a minority shareholding in Japan Airlines, as that airline attempts to restructure. Adding JAL to its network relationships would provide considerable additional clout to Delta’s Pacific system. Meanwhile the carrier is hopeful of approval for its joint venture on its new Australian route.