FTN forecasts improved RASMs for US carriers during Nov-2009

Analysts at FTN Equity Capital Markets stated during trading that stronger demand during the Thanksgiving holiday period and easier comparisons were likely to result in an improvement in RASM during Nov-2009. FTN expects a year-on-year decline of 6% during the month, compared to a 14% drop in Oct-2009. Should this occur, it will be the best monthly improvement for US carriers in over two years.

Analyst Michael Derchin stated, "we are expecting a significant sequential improvement in unit revenue change in the month of November compared with October as the airlines begin to lap easier [comparisons], capacity remains tight and bookings appear solid for the upcoming holiday periods,"

The analyst also forecast JetBlue (+1.7%) would post the best growth in RASM for the month.

Meanwhile, American Airlines (+1.6%) rose on the back of news Japan Airlines stated it would “make more sense” for it to remain in its current oneworld alliance and that it would be “easy” for it to seek antitrust immunity with the US carrier. JAL is also currently in talks with Delta Air Lines (+0.0%), which is trying to convince the Asian carrier to switch to the SkyTeam alliance.

Standard & Poor’s stated it is likely JAL will remain in the oneworld alliance. The analysts currently rate American Airlines’ stocks as ‘Hold’ and Delta’s as ‘Buy’.

The carrier also earned 94% of its available performance incentives through its capacity purchase agreement (CPA) with Air Canada, earning it approximately CAD5.4 million (USD5.2 million). Under the agreement, Air Canada buys all of Jazz's capacity at a set rate and then sells it to passengers.

Jazz Air Income Fund also announced during trading that it has completed its previously announced public offering of CAD75 million (USD71.6 million) principal amount of 9.5% Convertible Unsecured Subordinated Debentures. The debentures were sold to a syndicate of underwriters led by TD Securities, BMO Capital Markets, CIBC and RBC Capital Markets, and including Beacon Securities Limited, Genuity Capital Markets G.P., Salman Partners Inc. and Versant Partners Inc. on a bought deal basis. In addition, Jazz has granted the underwriters an over-allotment option, exercisable for a period of 30 days following closing, to purchase an additional CAD11.3 million (USD10.8 million) of Debentures, which, if exercised, would increase the gross proceeds of the offering to CAD86.3 million (USD82.4 million). Net proceeds from the offering will be used for working capital requirements and for general purposes of the fund. 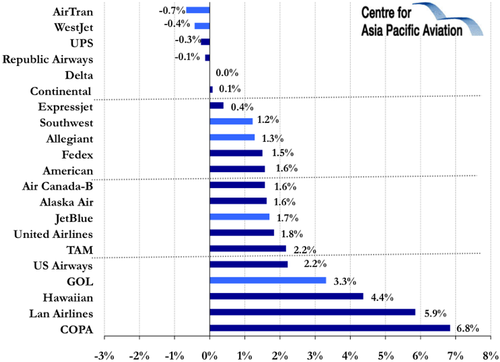