American Airlines reported a smaller-than-expected 4Q2010 net loss of USD97 million, less that a third of the USD344 million it lost in the same period in 2009. The result includes a one-off USD28 million charge, related to its Colombian routes. Revenue climbed 10.3% to USD5.6 billion.

American Airlines’ shares were down 7.2% in trading yesterday. There are growing concerns over higher fuel costs and American’s battle with third party ticket distributors. American Airlines’ fuel costs rose 12.9% in the quarter, with the carrier labelling fuel costs a "significant headwind in 2011". The airline is in talks with the Expedia and Orbitz Worldwide online travel agencies regarding distribution deals.

Elsewhere, UBS cut its target price for Air Canada From CAD5 to CAD4.5, maintaining its "buy" rating. UBS also raised its target for WestJet from CAD17 to CAD18, also with a buy rating. Shares in Air Canada were down 4%, while WestJet eased 0.3%. 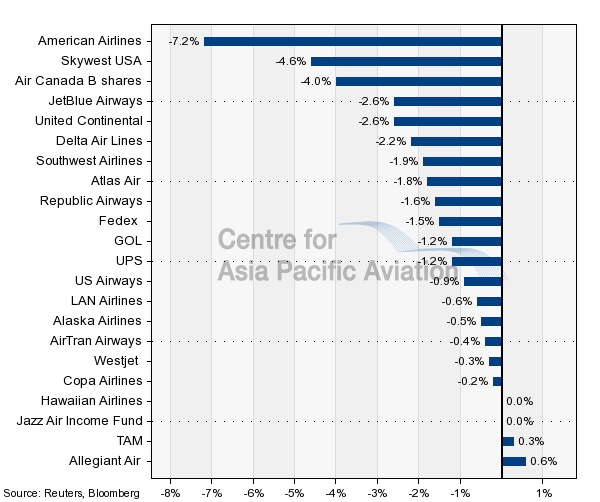