North and South American carriers stocks fell with the wider market on Friday (22-Jan-2010), which suffered its worst week since Feb-2009. Stocks fell on President Obama’s proposal for stronger limits on banking risks, in a week when stocks were already weak due to poor sentiment from 4Q2009 financial results and news Chinese regulators have ordered some of the country’s banks to temporarily stop lending.

American Airlines reportedly plans to lay off up to 175 pilots, 2% of its 7,800 pilots, in the first half of 2010 due to lower capacity plans, with 80 pilots to be furloughed at the end of Feb-2010. The carrier declined to disclose how much it would save from the furloughs.

In other American Airlines news, the carrier, along with Delta Air Lines (-1.1%) and United Airlines (+0.6%) increased domestic city pair fares by USD15, USD10 and USD6, respectively, a sign the carriers are soon to implement their first broad-based fare rise for 2010. The fare hike weakened the effect of the wider market sell-off on Delta and United, with United the only carrier besides LAN Airlines (+0.1%) to end trading in the black.

Continental Airlines meanwhile had its price target lowered by Barclays Capital to USD24.00 from USD26.00, after lowering its EPS profit of USD1.85 for 2011. However, Barclays lowered its expected EPS loss for 2010 to USD1.85. 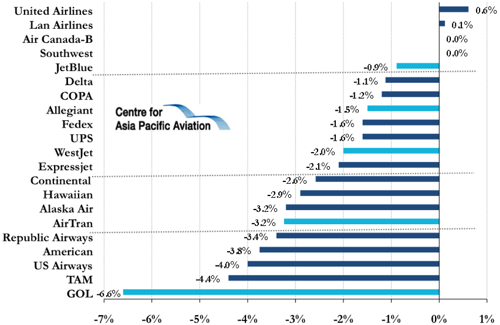