The majority of North and South American airline stocks were down on Thursday (26-Aug-2010) and the Dow (-0.8%) fell for another day, as continued concerns about the strength of the economic recovery outweighed news jobless claims fell more than expected. A rebound in oil prices (+1.2%), to USD73.36, also hurt airline stocks.

The AMEX Airline Index ended trading down 0.8%, a weaker decline than recent days.

Some weeks it just does not pay to get out of bed and American Airlines (-0.8%) is having one of those weeks, with its FAA fine as well the rejection of its TWU contract.

In a record penalty for the Federal Aviation Administration, the agency levied a USD24.2 million civil penalty against the airline for failing to follow MD-80 airworthiness directives. The airline said the fine was unwarranted and it would appeal.

The fine is just the latest in a series of fines levied by the agency against the airline as the US Department of Transportation and FAA flex their muscles at the airline industry to perhaps prove they are actually doing their oversight job. The FAA has also targeted Southwest numerous times.

Of course, Secretary of Transportation Ray LaHood, assuming his cloak of consumer protection as the most activist secretary in decades, got into the act with his usual quotable quote on behalf of passengers.

“We put rules and regulations in place to keep the flying public safe,” he said. “We expect operators to perform inspections and conduct regular and required maintenance in order to prevent safety issues. There can be no compromises when it comes to safety.”

The FAA alleges American did not follow steps outlined in a 2006 airworthiness directive requiring operators to inspect wire bundles located in the wheel wells of MD-80 aircraft. The directive, AD 2006-15-15, required a one-time general visual inspection by 05-Mar-2008 for chafing or signs of arcing of the wire bundle for the auxiliary hydraulic pump. It also required operators to perform corrective actions in accordance with the instructions of the applicable manufacturer’s Service Bulletin.

The action was designed to prevent the shorting of wires or arcing at the auxiliary hydraulic pump, which could result in loss of auxiliary hydraulic power or a fire in the wheel well of the aircraft. It also The Airworthiness Directive also sought to reduce the potential of an ignition source adjacent to the fuel tanks, which, in combination with the flammable vapors, could result in a fuel tank explosion.

The saga of this latest violation began in Mar-2008 during an inspection. After the faults were detected on two aircraft and fixes set by the airline, FAA found an additional seven aircraft at Tulsa with the same problem of not correctly following the AD as well as another eight in Dallas. The findings prompted the grounding of the aircraft after which FAA found 286 of the airline’s MD-80s were operated on 14,278 flights while they were still out of compliance. American ultimately completed the work. In its release, FAA said progress has been made in working with the airline on improving maintenance.

As if the fine were not enough, the vast majority of TWU workers rejected the airline’s latest contract offer. To put as positive a spin as possible, it released a statement that the 90 TWU-represented maintenance control technicians ratified their contract and, in a tip to the other unions, the airline added “these employees will realise immediate financial gains, along with more vacation days, holidays and sick time”.

Meanwhile, mechanics and stores agreements fell to defeat with the next stop being the National Mediation Board. The defeat came after four years of negotiations. TWU said that the agreement “did not represent an adequate return for the hundreds of millions of dollars of sacrifices we agreed to in 2003, to keep American planes in the air and prevent our employer from filing for bankruptcy". More than 6,000 members voted the contract down out of nearly 9,400 votes.

And, all is not well at Delta Air Lines (+0.1%) either, where former Northwest flight attendants filed suit yesterday alleging contracts have been broken concerning scheduling after international flights. The contract, says the union, says flight attendants are entitled to two days off after a long international flight, not the 11 hours Delta says. The airline said the suit is without merit.

In separate news, Delta filed applications with both the European Commission and the US Department of Transportation trying to take advantage of the slot relinquishments forced on American and British Airways as part of a favourable ruling on their antitrust immunity applications. The Atlanta-based carrier wants to expand its London service to Miami and Boston with twice daily year-round service to the cities from Heathrow. It cited increased competition as the consumer benefit for its request, noting that oneworld holds 47% of Heathrow’s take-off and landing slots followed by Star at 25%. SkyTeam, in which Delta is a leading member, has only 5%.

The new Boston and Miami services would start on 27-Mar-2011 if approved and would be offered in cooperation with its trans-Atlantic joint venture partners Air France-KLM and Alitalia.

Boston is one of the largest markets between the US and Heathrow, with more than 270,000 passengers annually and Delta, the second-largest carrier in Boston, would operate two flights daily to Heathrow, using Boeing 767-300ER aircraft. It would operate one round-trip daily in the Miami-LHR market.

Elsewhere, Air Canada (+3.2%) and WestJet (+1.8%) rose as the Canadian TSX was flat for the day. The market was gaining early in trading, before declining in the afternoon on disappointing 2Q2010 results from the Royal Bank of Canada. JetBlue (-2.8%) and Republic Airways (-2.4%) slumped. 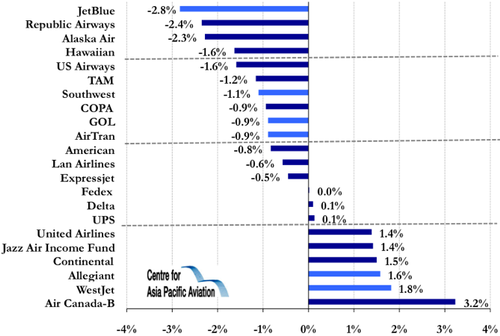