North and South American stocks were mixed on Wednesday (20-Jan-2010) as the market spent most of the session deeply in negative territory, following news Chinese regulators have ordered some of the country’s banks to temporarily stop lending, in order to slow credit growth.

Further pushing stocks down was news US housing starts were down 4% from the previous month in Nov-2009. However the Dow (+1.1%) rebounded late in trading, assisted by improved banking 4Q2009 results for Bank of America and Wells Fargo.

The AMEX Airline Index ended trading up, with all US legacy carriers making gains, assisted by a drop in oil prices (-1.7%), to USD77.62.

American Airlines was the biggest gainer in trading, after reporting a USD344 million net loss for 4Q2009, an improvement from its net loss of USD347 million in 4Q2010. Operating revenue declined 7.4% year-on-year, while operating costs were down 3.7% year-on-year. The decline in revenue was less than analysts had expected. Meanwhile load factor for the quarter was up 2.8 ppts, to 81.1%, as traffic (RPMs) declined 1.6%. Passenger yield per PRM was down 7.6%, to USD12.70 cents.

CEO and Chaiman, Gerard Arpey, attributed the losses to “heavy discounting” and the “steep” decline in Business traffic. However, Mr Arpey added the carrier "once again proved its resiliency and ability to battle through challenges while continuing to work toward a successful future. See related report: American Airlines gives a glimpse of industry recovery, updates on JAL

Axxion, the main holding company of Chile’s new President-Elect, Sebastian Pinera, announced plans to hold a shareholder meeting on 05-Feb-2010 to propose the sale of its 26.3% stake in LAN (-2.0%). Meanwhile, Costa Verde Aeronautica reportedly also plans to hold a shareholders meeting on 05-Feb-2010 to discuss a capital increase with the intention of purchasing Axxion’s LAN share. 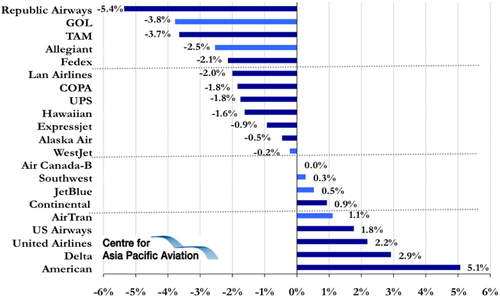