North and South American airline stocks were mixed on Thursday (17-Jun-2010) as the Dow (+0.2%) gained only marginally after new claims for jobless aid rose last week. It was also announced during trading that consumer prices also made their largest decline in one-and-a-half years in May-2010.

The AMEX Airline Index (+0.3%) was also up only slightly.

American Airlines (+1.6%) rose after Citi announced the day prior it is maintaining a "Hold" rating on the carrier’s stock, with a price target of USD9. The analysts stated recent meeting with American Airlines’ management and its pilot union may have tilted the risk/reward in the stock somewhat towards neutral/positive territory. Citi cited the reasons for the rating were the stock’s 23 ppt under-performance so far this year compared to the rest of the sector, USD500 million in revenue opportunities related to its Cornerstone Strategy and trans-Atlantic/Pacific joint business agreements and some marginal convergence in labour costs.

ExpressJet Holdings (-1.7%), parent company of ExpressJet Airlines, stated (17-Jun-2010) it intends to redeem an additional USD5 million in principal of its 11.25% Convertible Secured Notes due 2023 on 22-Aug-2010. The redemption is in addition to the previously announced USD5 million in principal redemption of its 11.25% Convertible Secured Notes due 2023 scheduled to occur on 09-Jul-2010. The additional redemption is part of ExpressJet's securities repurchase programme and the balance on the notes will be USD33.6 million.  This balance represents the par value due to noteholders when the notes become due 01-Aug-2023. After this redemption, the remaining balance in ExpressJet's securities repurchase programme will be USD11.6 million.

AirTran (-1.1%) also declined. Earlier this week, the LCC stated its outlook for 2Q2010 is "positive", with capacity up approximately 4.5% and summer unit revenue trends continuing to "accelerate". The carrier stated stage length adjusted unit revenues are now "well ahead" of 2008 levels. The carrier expects 2Q1010 TRASM to be up 11%-12% due to softer May close-in revenues, while Jun-2010 unit revenues are "likely to approach 20%" on a year-on-year basis. 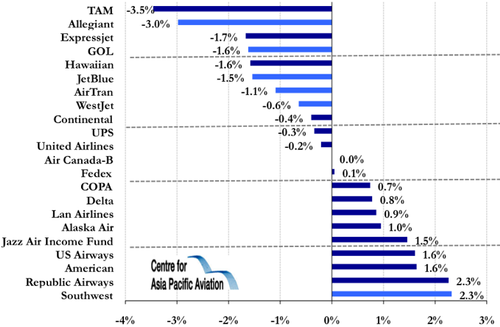