American Airlines (+3.7%) was the biggest gainer on Thursday (16-Dec-2010) after announcing it expects fuel costs to be higher this year, but also expects a rise in passenger traffic. The carrier expects to spend USD6.4 billion of fuel this year, compared with USD5.6 billion in 2009. Passenger traffic (RPMs) are expected to rise 3% year-on-year for American Airlines and 7% for American Eagle.

Responding to the forecast, analysts stated they now expect the carrier to report better-than-expected revenue for 4Q2010. UBS’ Kevin Crissey reduced his forecast loss for AMR for 4Q2010 from USD0.43 to USD0.30 per share. JP Morgan’s Jamie Baker also lowered his loss forecast from USD0.27 to USD0.24. According to Thomson Reuters, analysts on average now expect AMR to report a loss of USD0.39 per share for the quarter, but return to profitability in 2011.

US Airways (-0.1%) slipped for the day after Citigroup initiated coverage of the carrier with a "hold" rating and a price target of USD12.50. Earlier in the week, Barclays Capital raised its price target for the carrier from USD14 to USD15, with a "equal weight" rating. US Airways ended Thursday at USD10.3.

Delta Air Lines (-0.6%) continued to decline, despite announcing plans to expand its first-class cabin on more than 60% of its mainline domestic fleet – approximately 350 aircraft – as the carrier responds to business customers’ requests for more premium cabin seating. By summer 2013, Delta will add more than 1200 first-class seats to its domestic MD-88, MD-90, Boeing 757-200 and Boeing 767-300 aircraft as it retrofits and upgrades the aircraft interiors. The initiative, which follows the addition of first-class cabins to all Delta Connection regional jets with more than 60 seats, does not impact Delta’s previously announced capacity guidance. 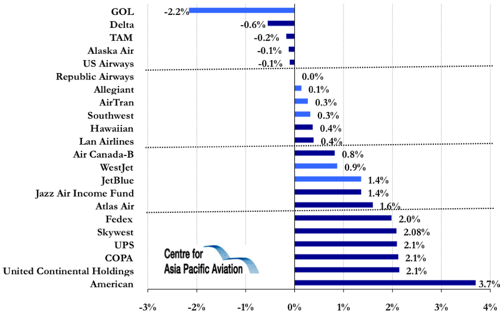